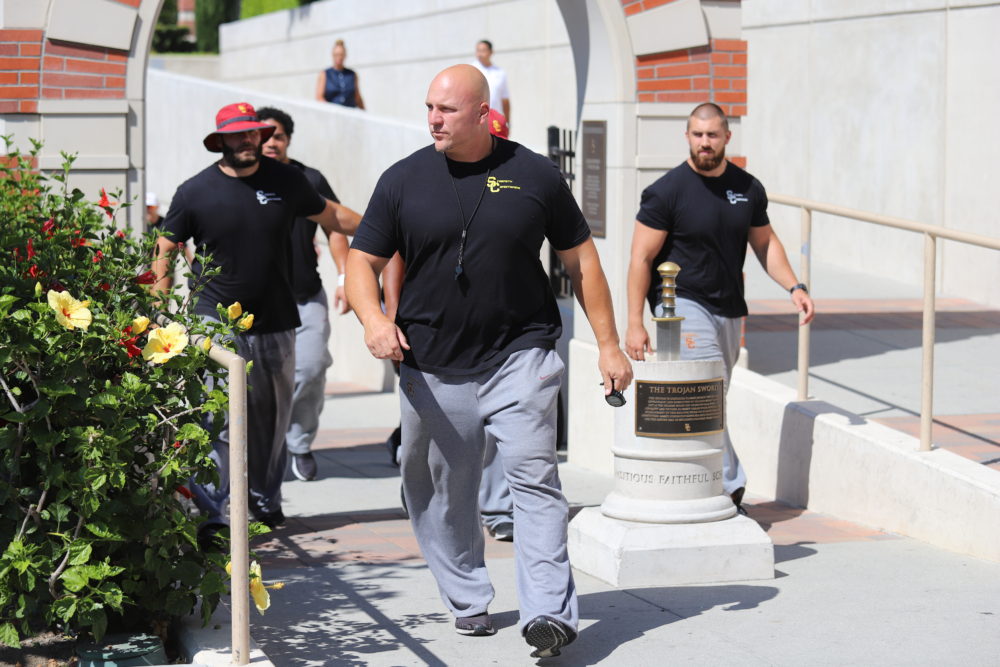 USC strength and conditioning coach Aaron Ausmus is plenty familiar with weights. He took over the position in March of last year, returning to USC after serving in the same role for the 2010-2013 seasons. But this past spring, due to the coronavirus pandemic, Ausmus was forced to learn plenty about waits. During a time when so much of the ensuing season’s success rests on the shoulders of the strength and conditioning staff, Ausmus and his assistants were separated from the players and stuck in a seemingly never-ending holding pattern, as days turned into weeks, and weeks into months.

It was a significant blow to USC’s on-field progress when spring ball was canceled after the first practice, as the Trojans needed to install new defensive and special teams systems, sort out the offensive line and find replacements for a few departed seniors. But it also delivered a blow to the weight room process, as Ausmus and staff were digging into Year 2 and looking to build on the success they’d found during the winter.

Coaches and players alike, in recounting the days leading to the spring shutdown, are consistent in stating how surreal it felt, and still feels, regarding how quickly the announcement came and the immediate flurry of activity in preparing to leave campus.

Ausmus said he remembers how abruptly it happened, but that there was a feeling they’d be back on the field shortly.

“First we get sent home and then the next week was spring break,” Ausmus said. “We thought we’d be back the Monday after spring break.”

Ausmus said during that week they started hearing the pause would be longer than that–maybe until Easter. It was at that point they started putting together a long-term plan together.

“There was nothing concrete, so we had to start sitting down and planning for a longer transition,” Ausmus said. “This is going to be longer than we thought.”

From early March until the end of June, there was very little Ausmus could do in order to make sure the conditioning program he’d built was running smoothly. And that meant potentially giving up all the gains that had been made during the winter months.

“The winter speed and strength program, from January to March, was going really well,” Ausmus said. “Guys were really competing and pushing their limits.”

“It was a work in progress,” Ausmus said. “We had a lot of players that needed to learn the accountability part in those areas and be serious about that. After a couple weeks, things were trending in the right direction in all four areas.”

But with football shut down, it was impossible for Ausmus to hold players to any kind of standard. Because the NCAA labeled it a voluntary period, coaches weren’t able to require any conditioning or training work to be done. Ausmus said they weren’t really even able to ask players about it. They were able to send players a training schedule in two-week increments–just how it’s done on campus–and players could also receive some meal prep, Muscle Milk and various items programs were allowed to provide.

Though, that didn’t alleviate all the challenges.

“Hopefully guys are staying active and doing things,” Ausmus recalled thinking. “But then gyms are going down, and they’re not allowing players in the park. There’s restrictions every which way you look at it. It was a really weird three-and-a-half month period where you really had no idea what was happening to the program. Were you treading water? Sinking fast? Thriving?”

Ausmus could quickly feel what so many players have said upon returning to campus and being back with the team–just how much the players missed being around their coaches and teammates.

“Our goal was to have one interaction, one phone call, once a week with them to check in,” Ausmus said. “The first couple of weeks you could tell there was a lot of scrambling going on. There was so much newness to the situation. But after that, they were excited we were calling because they really just wanted someone to talk to. You could feel through the phone that a lot of guys didn’t want to get off the phone. Something you thought would be a five or ten minute call ended up being a 40 minute conversation because they just wanted to talk through things.”

June 24 marked the first day that USC student-athletes could begin a return to campus for voluntary workouts. That day was the start of Phase One, which included only local returning players in six sports, including football.

“It was very different when we first got back,” Ausmus said. “Everything was different and it was just something you had to get used to: the new normal.”

Ausmus said he quickly learned that rules would be plentiful, and also ever-changing. The process to check into the facility and to clean the equipment were rigorous. There were masks and gloves, and constant updates where gloves would be required one day but not a few days later.

“It was constantly a curveball,” he said.

A couple of the biggest curveballs were the limited groups of players that could work out together, as well as not being able to work out indoors. That meant hauling weights out to the practice field.

“We were told that might be a two or three day deal,” Ausmus said. “That turned into two months.”

It was around the first week of July when a vast majority of the players were back on campus, and Ausmus said he wasn’t all that surprised by the shape in which many of them returned.

“It was the full spectrum of guys coming back in different shapes,” he said. “You kind of learn the players’ habits and their lifestyles. I probably could have gone through the roster and picked out who will be in great shape, who will be okay and maybe a handful of guys who will look like a civilian.”

Ausmus pointed out safety Isaiah Pola-Mao, wide receiver Amon-Ra St. Brown, offensive tackle Alijah Vera-Tucker and tight end Erik Krommenhoek as a few of the early returners who he called “pillar guys,” capable of taking over an offseason. He also mentioned defensive end Connor Murphy and offensive lineman Liam Douglass as guys who caught his attention in a positive way with their physical progress during the break.

Strength and conditioning work was still being done outside when the players and program were dealt a blow in early August, as the Pac-12 announced it would postpone its college football season until January 1, 2021 at the earliest. It was another curveball for the USC players who were plenty accustomed to seeing them by that point.

The players were able to stay in good shape while working outside, even without access to the traditional weight racks.

“Was it the type of training we would have normally gotten? Absolutely not,” Ausmus said. “But we made the most of it and stayed in really good shape. We got to run a lot and became pretty fit.”

About a month later, the players got a bit of good news, as they could take their workouts back into the weight room of the McKay Center.

“Once we got the green light to go back into the weight room, we tried to storm in like we were cramming for a test,” Ausmus said. “You could see the urgency with us and the players. We quickly tried to get them in some strength situations and they did a good job of playing catch up.”

The players haven’t been the only ones in the weight room. Ausmus said the defensive coaching staff has been on hand as much as possible and allowable, as they look to continue creating that bond with the players that couldn’t be established during the time away.

“All those guys have done a good job of coming down and investing in the players,” Ausmus said of Todd Orlando, Vic So’oto, Donte Williams and Craig Naivar. “They’re behind the timeline because we hit pause for a long time. They’re trying to invest and get to know them as fast as possible.”

Players have had positive things to say about the energy Orlando and the defensive staff has brought to the program and Ausmus sees that as a benefit as well.

“They’re definitely like an extension of the weight room and the strength staff,” he said. “And they’re not only coaching the defense but they’re getting around to guys on the other side of the ball. Those guys are seeing that love and that energy.”

One week after getting back inside for workouts, the Trojans received more good news when the Pac-12 announced it was rebooting the fall season. Ausmus said that decision kicked the weight room into overdrive.

“I think the buy-in got really strong when it was announced that we were going to have a season,” he said, adding that so much of the will-it-won’t-it confusing during the summer took up a lot of mental bandwidth for the players. “Until we really got word that we were going, that’s when it felt like the team was starting to get back to where we had it in March. That’s just the nature of the beast. People are goal-oriented. When there’s something to go after, they get in line faster.”

Looking back at it now, Ausmus considers this whole episode to be a simple calendar shift of two months. A fall camp that normally would have kicked off in early August now did so in early October. A prep period of May, June and July turned into July, August and September. He said delaying the season until November 7 gives all the Pac-12 teams enough time to get the players in a “reasonable state to play football.” The hope now is that a six-week regular season with no byes can be accomplished without the Trojans seeing any more curveballs thrown their direction.

Fall camp is closing in on its final week and the Trojans are just about a week away from finally kicking off the 2020 football season against Arizona State. It wasn’t at all easy or straightforward to get to this point, and Ausmus and the strength staff should be credited with doing some of the heavy lifting in making sure USC is ready for this year.

“It’s probably a year of my coaching career that I’ll never forget,” Ausmus said. “Every day, every week, is a new challenge. You have to step up to that challenge and try to make the best of it.”