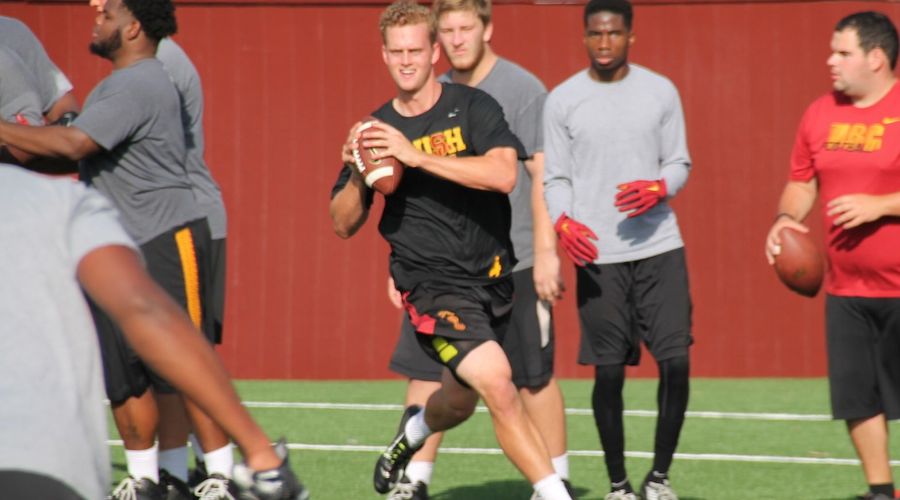 The USC summer throwing sessions get going this week and it’s always one of the more interesting times of the year to check in on the team in this setting.

Things are fairly informal in the throwing sessions as the coaches are not allowed to be in attendance and they are run by the players. It’s usually the quarterbacks who run the drills, and this summer is expected to be the same with Max Browne, although there are times that others can step forward to assert themselves in a leadership role as we saw last summer with JuJu Smith-Schuster.

Don’t take the word informal to mean that there is no structure to what takes place, the coaches have laid out to the team some of the key items that they want to take place, so a throwing session mirrors elements of a practice in many cases.

Once the conditioning sessions are concluded, the S&C coaches leave the field and a team manager breaks out the footballs. The quarterbacks begin warm-ups with routes against air, and the linemen go to the end zone area to work on various drills. Then there are some one-on-one routes where defenders are brought into play, and then it turns into a full 7-on-7. The linemen are eventually brought in for 11-on-11 work, it’s not anything full contact but it’s an opportunity to get more reps on certain plays.

While it isn’t “real” football, these sessions still give an opportunity to learn a lot about the team and certain players who might be ready to step up into bigger roles. As mentioned earlier, it was notable last off-season to see JuJu take such an aggressive leadership role, especially considering there was a 5th year senior at quarterback in Cody Kessler, a guy who was consider a leader himself. But it was JuJu who really took control and we saw that kind of personality extend into the season for him, and now it’s a case where JuJu clearly sets the tone for the entire team.

You can also start to judge the work ethic of the team in these sessions, especially with how the players are policing themselves. Are players getting after each other on certain reps? Is the whole team engaged, or just the players who are in on the play? Is there a lot of goofing around on the sideline? There is always going to be more levity to these workouts as opposed to an in-season practice but there is still work to be done, and how they go about it can be a telling sign.

It will be a chance to see how some of the injured players are coming along. Is Cameron Smith able to go through any limited work as he rehabs from his knee injury? How about Chris Hawkins on his ankle, Chris was able to do a lot of sideline running toward the end of spring so chances are he should be ready. Can John Plattenburg and Jonathan Lockett take part? And what about linemen such as Toa Lobendahn, Noah Jefferson and Khaliel Rodgers?

And then, of course, there are the newcomers. One of the best parts of these sessions is to see the incoming freshmen and to judge how they might be able to fit in with immediate playing time. I think Jackie Jones is one name that most Trojan fans want to see because there’s a good chance he will slide into the corner rotation right away. What about someone like Jamel Cook at a crowded safety spot? Or Connor Murphy on the d-line? We got glimpses of John Imatorbhebhe and Michael Pittman in spring but I’ve got a feeling both of them are going to show more in summer.

And there is always the matter of the quarterback competition, where Browne and Darnold will continue battling into fall camp but both players will certainly be looking to make strides toward the job during the summer. While it will be Browne starting things off with the first unit, the guess here is that both quarterbacks will end up splitting time fairly evenly during these drills.

Any way you look at it these throwing sessions give an opportunity to watch the Trojans on the field during the dog days of summer, and that is always a good thing.