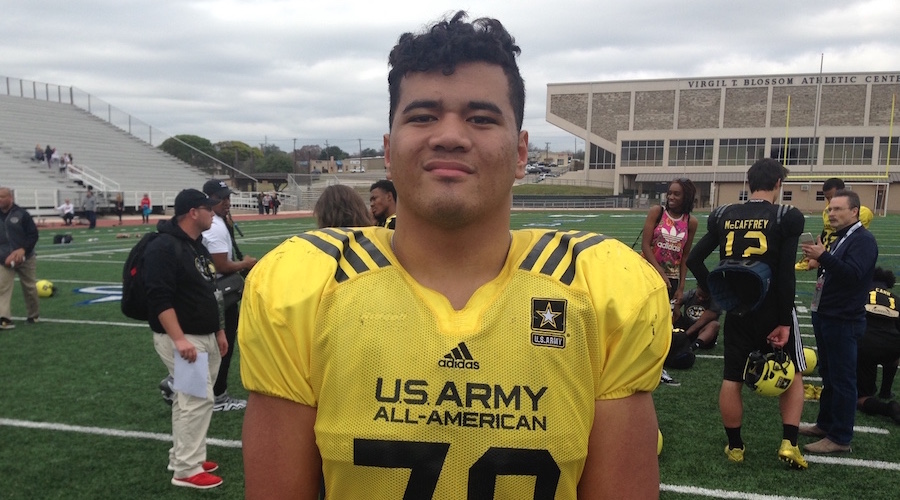 With Signing Day inching closer and closer, Clay Helton and his staff are set to welcome an impressive collection of official visitors on campus for the second consecutive weekend. A group that is heavy on USC commits, it also features some notable out-of-state targets, including a pair of heralded defensive tackle prospects.

While this list is still fluid, and more names could potentially still be added, here’s a closer look at all nine of the prospects expected at this time.

A fantastic all-around tailback with big-play ability, Carr was the first player from the Class of 2017 to commit to the Trojans, doing so way back in March of 2015. Around a year ago, however, he decided to open his recruitment up a bit, and while USC is still considered to be the overwhelming frontrunner, he’s just coming off an official visit to Oregon, with UCLA also in the discussion. Expect the Trojans coaching staff to work hard this weekend to ensure that he stays firmly in the fold.

A long athlete with excellent pass rushing skills who projects to the Predator outside linebacker position at USC, Echols committed to the Trojans this past August after decommitting from UCLA less than a month prior. Since that point in time he’s emerged as one of USC most vocal recruiters, so you can be sure that he’ll be getting in the ear of the undecided prospects on this visit.

Grimes is a big, tall receiver who showed off his versatility by filling in at quarterback for Desert Pines during much of his senior campaign after the team’s starter went down with an injury. Grimes committed to USC in the spring, but he decided to take officials to Arizona State, and most recently, Nebraska. And while he’s still thought to be a solid Trojans pledge, this weekend’s trip will obviously be important in terms of locking him up for USC.

A pro-style tight end with a strong all-around skill set, Krommenhoek completely shut down his recruitment after committing to the Trojans this past summer, and this weekend’s trip will be the only official visit that he takes. He was also on campus at USC as recently as this past November, when he came down to check out the Trojans’ victory over Notre Dame in person.

Vera-Tucker is another player whose commitment to the Trojans is solid as could be. A high school teammate of Je’Quari Godfrey, who just flipped his pledge from Cal to USC last weekend, he helped guide Bishop O’Dowd to a state title with his outstanding play at left tackle, and he also contributed at defensive tackle at times. For the Trojans, he’ll line up at either offensive tackle or guard.

The Trojans would love to add one more inside linebacker in this class to pair with early-entrant Tayler Katoa, and Jones would certainly fit the bill. Florida appears to be out in front after his official visit to Gainesville last weekend, but the Trojans still figure to have a definite shot in the race for his signature. After all, this will be the second time that he’s made the trip west to check out USC’s campus, and he’s also grown tight with a number of current Trojans pledges throughout the course of the recruiting process. He’s currently on a mid-week visit to UCLA, and he’s also considering Texas A&M and Florida State (Jan. 27 visit) as well, so this should be one of the more interesting recruiting battles to watch down the stretch.

With defensive tackle a definite position of need, this weekend is huge for Trojans defensive line coach Kenechi Udeze and the rest of the staff as they try to leave a lasting impression on Tufele, who is one of the nation’s most coveted defensive tackles. A potential instant impact performer, he possesses a strong build to go along with a fantastic burst off the line and a non-stop motor. Coming off an official visit to BYU, he has a top 5 that includes the Cougars, Trojans, Ohio State, Michigan and Utah – the latter of which is rumored to be USC’s biggest competition. Tufele will use his final official visit on the Utes next weekend.

Give credit to the Trojans staff for never giving up on Tuipulotu, a long-time Washington pledge who has now apparently been added to this weekend’s visit list. With Chris Peterson’s no-visit policy up in Seattle, combined with the fact that Tuipulotu is a potential early enrollee, it’s safe to say that this is a huge development. A physical, explosive defensive tackle, he was one of the overwhelming standouts at the recent U.S. Army All-American Bowl, and he’s another player who could definitely make his presence felt early at USC.

A teammate of Grimes, Wallace received an offer from the Trojans in late December, just a few days after he had given a pledge to Arizona. He remains committed to Arizona at this time, but the fact that he’s following through with his plan to visit USC this weekend would appear to indicate that he has some legitimate interest in the Trojans. He’s being recruited as a cornerback by Helton and his staff, with some spot duty on offense having also been discussed.