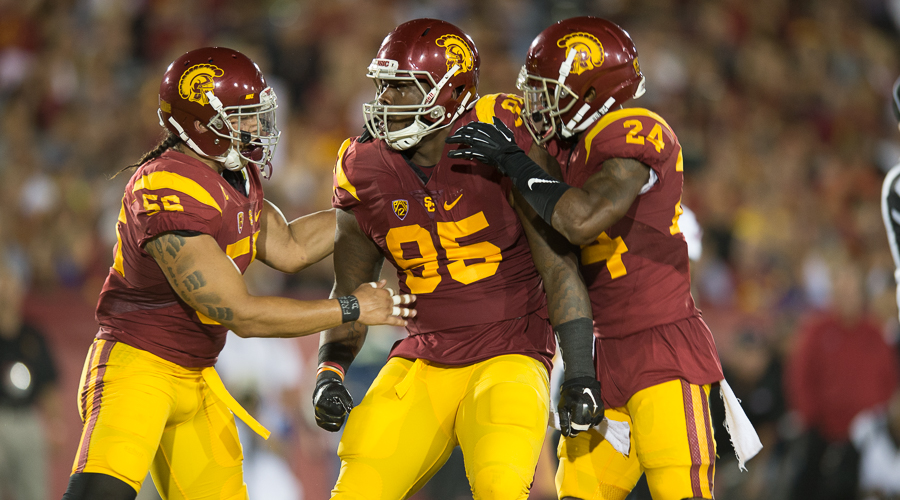 In this week’s edition of the mailbag we talk USC RB coach, the status of E.J. Price, position battles and Kenny Bigelow:

Is there any possibility that EJ Price stays and how does his schollie impact our total count?

The fact that E.J. is enrolled at USC for the spring semester (which has been confirmed by the school) tells me that you can’t rule out a return to the team. It certainly doesn’t mean it will happen but it’s hard to understand why he would be enrolled if the possibility didn’t exist. As for how his scholarship would count that is an interesting question because while he was removed from the USC roster after his departure in September it’s unclear if he ever officially gave up the scholarship, or how the spring semester costs are being covered.

How is Bigelow’s recovery coming along? Will he be able to participate in Spring practices?

All indications are that Kenny (photo above) is “ready to go” for spring and it would be such a huge boost for the team, and for Kenny, if he is able to come back and resume a major role. But I’m also in favor of taking this one slow. I would be happy if Kenny gets enough work in spring to get comfortable again and is able to stay healthy. Then I’ll worry about him continuing to work through summer and into fall camp.

What early enrollee are you most excited to see in Spring Ball?

Marlon Tuipulotu. I really liked what I saw from him last year on the camp circuit and can’t wait to see him on the Trojan practice field.

Who is on the short list to replace Tommie Robinson at RB coach? Were you surprised he made the move?

As usual we haven’t heard much from the rumor mill when it comes to a Clay Helton coaching search. There is always the thought of moving Johnny Nansen back over to running backs as he saw good results there in the past. Ron Gould, who has a solid background at Cal, has also been mentioned. And yes, I was surprised Robinson made the move if only because he came back to USC in order to build exactly what was being built. Everything was trending in a good direction including the stable of backs he had to work with, it just seemed like a strange time to leave. I understand his relationship with Ed Orgeron is a solid one to help attract him to LSU but I also think there is something to the rumblings of USC contract/financial issues being a factor in his decision.

What positions do the staff focus on for the 2018 class?

Linebacker is a priority, and this is one of the best years I’ve seen for LB’s on the west coast. Raymond Scott from Narbonne and Bo Calvert from Oaks Christian are two verbal commits who project at linebacker and two other top prospects are Palaie Gaotoete from Bishop Gorman and Solomon Tuliaupupu from Mater Dei.

Any news on whether USC is pursuing Texas Tech DL Transfer Breiden Fehoko? is USC interested? Also from all accounts it looks like TE/DE Devin Asiasi is transfering out of Michigan … If so, and his grades are good does USC pursue him as a DE?

Nothing lately on Fehoko. The Trojans certainly loaded up on interior linemen in this last recruiting class but I think you always want to consider a guy who has played as much football as Fehoko in his first two years, it gives you more of a belief in what he can do at the college level. With Asiasi, I wouldn’t worry about which position he will play, if there is room I would bring him in. I saw more than enough of him in high school to think he can be a real contributor.

Any new info on where Matt Corral may land in the autumn?

There are all kind of rumored destinations from IMG Academy (which recently saw a pair of top 2018 recruits transfer from the same area as Corral), Bishop Gorman, Long Beach Poly, St. Bonaventure, buena (local school), San Clemente and Westlake (where the former Oaks OC is now head coach). So far no word from Matt.

Garry, what position battle are you most excited to see in the spring?

Nose tackle is at the top of my list. Hopefully we can see enough from Kenny Bigelow to accurately judge where he’s at with his recovery from knee surgery (and the indications are that he’s ready to go) and I’m anxious to see if Josh Fatu can make a claim for the job. I’m also very interested in both offensive tackle spots, the outside receivers and inside linebacker.

My main concern is that if USC decides to go supersonic speed on offense then will the defense be in condition to be on the field more. Do you expect more shoot outs and will Clancy have to rotate in players more often than he likes to do? I would like to see the defense get more take aways and score more.

It’s going to be very interesting to monitor because Helton still maintains he wants the ability to control games on the ground when needed, and there is also the desire to be balanced. But I can also understand the offensive coaches wanting to see where they can go with Sam in his second year, and the ability to speed it up at times is certainly tempting with a quarterback who likes to attack the way he does.

Who are projected starters for OL and DL going into Spring? Who are the other players that may break into the lineup (barring injuries)?

For the offensive line it will be interesting to see how they line-up without Toa Lobendahn, who will be unavailable due to rehab from knee surgery. It sounds like Chuma Edoga will be at left tackle, and Chris Brown will probably be at left guard. Nico Falah will be at center and Viane Talamaivao will be at right guard. The right tackle spot is where things could get interesting. Nate Smith is not available due to injury, and with Edoga on the left side for spring there is nobody who has taken consistent reps at RT. Do you look at Clayton Johnston or Roy Hemsley? Or maybe Brown is at RT with Hemsley at LG (where he took reps in fall). On the DL, my starters heading into spring would be Rasheem Green and Kenny Bigelow and the third spot is flexible depending on how Clancy Pendergast runs things. Could it be someone like Fatu or Christian Rector? Is Liam Jimmons ready to step into a role? And don’t forget early enrollee Marlon Tuipulotu, he’s definitely capable of making an immediate impact.

We didn’t get to see our two top-rated recruits, Betiku and Jamel Cook, on the field much in 2016. Do you think they will see the field a lot in 2017?

I do think we will see more of them and I’m looking forward to it because they are so physically talented, but the reality is that both are still at fairly crowded spots. Betiku is behind a pair of returning starters in Porter Gustin and Uchenna Nwosu (although there are rumblings Nwosu could get a look at ILB) while Connor Murphy is also in the mix as well. There hasn’t been much attrition at safety either as Leon McQuay left but Chris Hawkins, Marvell Tell and Matt Lopes are all back, and Ykili Ross and C.J. Pollard are also there.