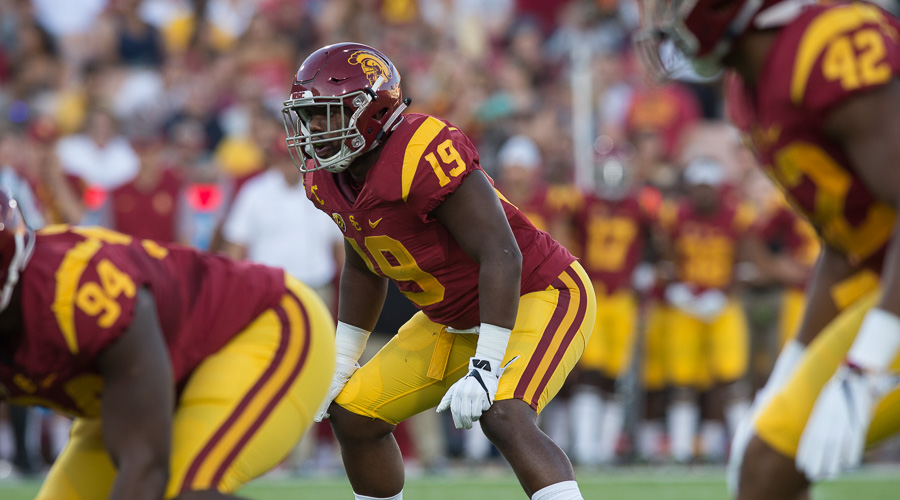 I’m looking forward to seeing the Trojans back in the Rose Bowl. There simply aren’t too many things better in sports than to see USC as part of this game, and this year we get a chance to watch two proud programs who both seem to have re-gained some footing in the 2016 season and are coming into the game on a high note. One of the more impressive stats about this game is that the two teams are on a combined 17-0 win streak after each suffered a lopsided loss earlier in the year.

I want to see how the Trojans translate the energy and focus that was on full display toward the tail end of the season and carry that over into the bowl game. Kevin Bruce talked in his Defensively Speaking article this week about how practice intensity and conditioning will be important to watch, especially as USC conducts three full weeks of practice leading up to the game. The Trojans didn’t take advantage of all the allotted practice sessions for the bowl last season, a decision Helton has been clear will not be the case this year.

I’m looking forward to seeing how the creativity of the USC offense matches up with the Penn State defense. My memories of the 2009 game were of Mark Sanchez throwing the ball all over the place as the Nittany Lions struggled to keep up, and Sam Darnold is certainly capable of putting up big numbers himself. It will help Sam to have two of his main offensive weapons healthy as JuJu Smith-Schuster and Justin Davis will benefit from the extended rest after the Notre Dame.

The first thing I’m looking forward to watching is simply two of college football’s most storied programs going head-to-head in the Granddaddy of them all. Making this matchup all the more exciting is the fact that these are also two of the hottest teams in the nation right now, and they both took somewhat similar paths to get to where they are today. The Trojans overcame a bleak start to reel off eight consecutive victories. Penn State, meanwhile, made an almost identical turnaround, and they enter the contest riding a nine-game winning streak. This Rose Bowl game would seem to be the perfect reward for both teams.

Sam Darnold vs. the Penn State defense. Arguably no individual performer has played more of a role in USC’s dramatic turnaround this season than Darnold, the redshirt-freshman passer who has put his incredible playmaking skills on display on a weekly basis since entering the starting lineup. He figures to be tested mightily, however, by a Nittany Lions defense that averages three sacks a contest – the No. 15 mark in the FBS. Darnold’s ability to make plays under pressure could be a huge factor to watch in this game.

One last chance to watch the seniors, and potentially, some juniors as well. Led by guys like Michael Hutchings, Zach Banner, Darreus Rogers and Justin Davis, the senior class at USC deserves a ton of credit for the way that they’ve battled through adversity not only this season, but throughout their entire career, and this game is certainly the prefect sendoff for them. The Rose Bowl might also provide us with the last opportunity to watch some talented underclassmen who could possibly declare for the draft early, namely Adoree’ Jackson and JuJu Smith-Schuster – two fantastic performers throughout their time on campus.

I am looking forward to watching how Penn State tries to defend both Trojans quarterback Sam Darnold and tailback Ronald Jones ll. Notre Dame did a reasonably good job of containing Darnold in the pocket, so we’ll see if Penn State follows that game plan. As for RoJo, Penn State may be the most physical defense the Trojans tailback has played this season, not necessarily the best defense, the most physical. While ND was able to contain Darnold from getting outside, they were challenged in dealing with Jones. I could see the Trojans doing more play-action stuff, which could give the Nittany Lions fits.

Without question, I am looking forward to the battle between each team’s offensive and defensive lines. There is the school of thought that Big Ten players are more physical than Pac-12 players, especially in the pit. The Trojans have become more aggressive on both offensive and defensive lines as the season progressed, but they’ll probably need that aggression in what should be a major test of “will,” which could well decide the game. Let’s see how the PSU defensive line handles the Trojans two All-Pac-12 offensive tackles in Zack Banner and Chad Wheeler, respectively. Another key will be how PSU offense attacks the interior of the Trojans’ defense, especially nose tackle Stevie Tu’ikolovatu, the Cardinal and Gold’s second-team All-Pac-12 nose tackle. This is just the type of physical game that “Mr. T” loves. We’ll see how Trojans defensive coordinator Clancy Pendergast elects to deal with PSU’s own superstar backfield of quarterback Trace McSorley and tailback Saquon Barkley.

The last area of inspection for me will be the Trojans secondary against the Penn State wide receivers. In watching the Big Ten Championship Game, the Wisconsin secondary had so many breakdowns and poor tackling that it made the Nittany Lions receivers look like they all belonged in the NFL. The gut feeling here is that the Penn State receivers aren’t as good as they looked against the Badgers, which bodes well for the Trojans case. Conversely, the Trojans receiving unit is probably as good as PSU has seen and with Nittany Lions defense void of star defensive power, the Trojans should be able to be production with the Nittany Lions defense.