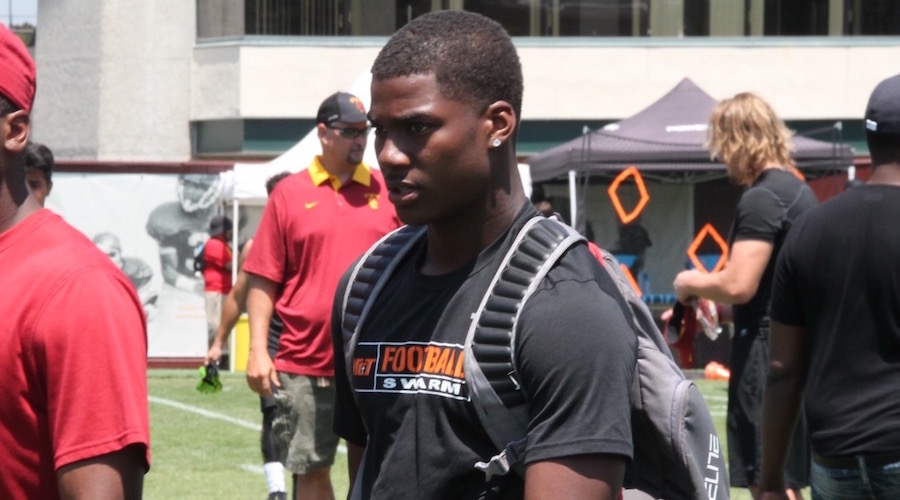 Southeast success: The Trojans have four commits from the southeast in this class and three of them are on teams with a combined 28-1 record. Marlon Williams (photo above) leads McGill-Toolen (10-0) into the first round of the Alabama playoffs this week against Jefferson Davis. Juwan Burgess was part of a 9-0 Plant team that won the Florida District 7A-8 championship. C.J. Miller and McEachern are 9-1 (only loss by 3 points to perennial power Grayson) and face Hillgrove this week in the regular season finale. Jacob Lichtenstein and Cypress Bay head into the season finale this week at 4-5 but they did get a big win last week 48-7 over rival Everglades.

Corner list shrinking: It’s considered one of the strongest secondary classes in recent memory in the area which was considered good news for the Trojans, particularly at the need spot of corner. But with the recent commit of Jaylon Johnson to Utah, we’re seeing the list of potential options grow smaller and smaller. Others who have given commits elsewhere include Deommodore Lenoir (Oregon), Elijah Hicks (La Mirada) and Greg Johnson (Arizona). That’s not to mention Thomas Graham, a one-time USC verbal who eventually de-committed. Right now the Trojans have a corner commit from Wylan Free, generally regarded as a 3-star prospect with a good frame for growth. There is a top option still available in Darnay Holmes although USC would be considered a longshot at this point.

Junior backers: One of the position groups that looks to be the strongest for the class of 2018 is linebacker with the Trojans holding two verbal commits already and several other promising prospects in the area as well. Right now USC has commitments from Raymond Scott (6-2, 220) of Narbonne who is likely projected as an inside linebacker, and Bo Calvert (6-4, 215) from Oaks Christian who projects as an OLB. There is also Solomon Tuliaupupu (6-3, 225) from Claremont, Palaie Gaoteote (6-2, 220) from Bishop Gorman and Merlin Robertson (6-1, 235) from Serra.

Notre Dame weekend: There hasn’t been a lot of emphasis early in the season on bringing official visitors in for USC homes games, or even to have the sidelines completely full of prospects. Expect that to change at the Notre Dame game when the energy level is expected to be high for the annual rivalry game. Among the recruits who have said they either will visit or have plans to visit are Greg Rogers, Austin Jackson, Brandon Pili, Wylan Free and Hunter Echols. You can also be sure that the unofficial visitor list will be long as well.