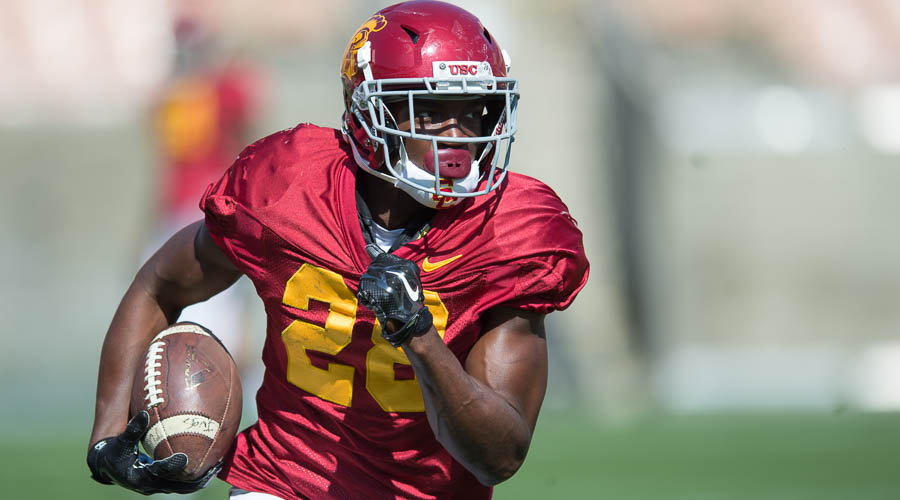 In this week’s edition of the mailbag we look at the progress of Roy Hemsley, rainy USC games and match-ups for the upcoming game against Cal:

Where is Roy Hemsley? Seemed like the heir apparent at LT in the spring, then was passed up by Price (who is now transferring), and now is like a ghost; don’t even hear his name. I thought this kid would be a starter at LT for 2 years. Seems to have the size, athleticism, frame, etc. to be very good. What’s going on?

Roy is working as a reserve at left guard these days. It’s the end of his redshirt freshman season for a guy who was raw at the game of football when he got here so there is still a lot of developing that needs to be done. Roy was primarily a basketball player until late in his high school career, and it’s been a big step up from tiny Windward to a school like USC. What I like about his potential is the footwork and athletic ability for a guy his size, it just needs to continue to be refined.

How is Jamel Cook progressing?

I was hoping to see Cook make a case during the bye week practices for burning his redshirt year but that didn’t happen. I just didn’t get the sense that he’s back to full strength yet as he comes back from his foot injury, although I’m certainly encouraged by the fact that he’s been able to get back on the practice field in recent weeks.

What are the chances that Max Browne transfers to Cal next year as Davis Webb is a graduate transfer himself?

It makes as much sense as any option, if Max intends to transfer as most anticipate.

Who starts, RJ or Ware?

Should be RoJo but it wouldn’t surprise me if they get similar touches. I think Ware (photo above) has shown he’s a guy who can be a steady option, not a lot of fancy moves to his game but a lot of physical presence.

I apologize if this has been answered. My what-happened-to question is re: Khaliel Rogers. Why has he not been seen at all at either OL or DL since he switched back over? I was thinking he’d see a little playing time on both sides of the ball. I understand that Falah has earned the job at center, but is Khaliel injured or something? He has seemingly vanished.

Khaliel is not injured. He’s working as the #2 center behind Nico, who has been playing well and who has stayed healthy, which has limited the opportunities for Khaliel. But the coaches aren’t going to flip him back over to defense either because they need him working as the back-up to Falah. He’s being a team player even if it is costing him some potential playing time on the DL.

Run or pass, which do you favor on offense this Thursday? I know Cal’s secondary has been Swiss cheese, but if you’re Coach Helton, isn’t this the game you pound the rock like there’s no tomorrow? Control the clock, keep their QB off the field and just keep feeding Jones and Ware — especially Jones who is long overdue for a breakout game.

I think this is a run first game for several reasons. One is that the Cal run defense is giving up 270 rush yards per game, one of the worst marks in the country. And the more you can control the ball the more you keep it out of the hands of the Cal offense. I also think it would be good to build continued confidence for the young running backs since we don’t know for sure how long Justin Davis might be out.

Are recruit visits up or down this year in relationship to the past 5 years?

It’s been a similar pattern in recent years of focusing visits toward the end of the year, primarily after the regular season. There will be quite a few visits for the Notre Dame game, and then the rest of them will take place on weekends when the coaches would have more time to spend with the recruits during the trip.

I would say two cases with signs of that, the end of the Hackett and Kiffin eras. One common trait with both coaches is that neither had particularly great relationships with players so when times got really tough there wasn’t much goodwill to fall back on. But with players it’s also important to remember the loyalty that comes for the coach who gave them the scholarship. Even when things go bad, I don’t think it goes as bad for the players as it does with most fans.

We took quite a few commits early that were not considered elite national recruits among our 15 commits. Yet, there are still a lot of top uncommitted national recruits that have expressed interest in USC. What’s your interpretation of that strategy?

I think a large part of how you interpret the coaching strategy depends on how they fill those remaining spots. I go back to last signing day when there were plenty of legitimate concerns about having so many open spots going into the day, and they were filled about as well as anybody could have hoped. And I think you are absolutely correct in that there are plenty of elite guys out there still (Darnay Holmes, Jaylon Johnson, Martin Andrus, etc) who could have a dramatic impact on the overall level of the class.

Will Cal be able to cover USC’s TEs? What are the most telling matchups USC can exploit on offense or defense?

No, I don’t think the Cal defense can slow the USC offense, whether that is with the tight ends, the receivers, the backs, etc. I just look at it as a situation where the Trojans should be able to put up a lot of points in this one, while the key match-up will be on the USC defense to prevent the Bears from doing the same. I don’t know how much pressure the Trojans will be able to get on Webb because he gets rid of the ball so quickly so I think the USC pass coverage in this game will need to be on point.