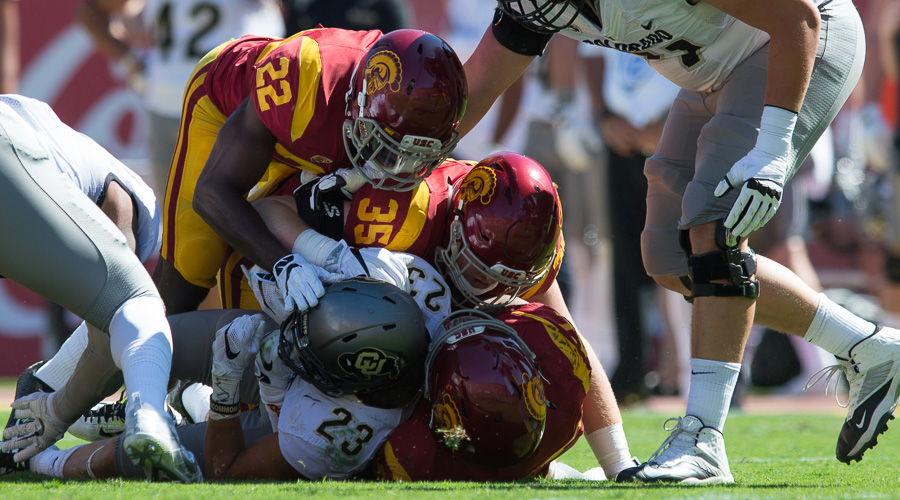 All-in-all a pretty darn good defensive effort yesterday afternoon against a very solid and dangerous Colorado team. They were ranked 21st for a reason with a 60% run 40% pass offense with total offense averaging over 500 yards per game and 43 points. Importantly I really liked that our defense forced the Buffs to flip their tendency on its head running only 40% and force throwing at a 60% clip. That’s good defense to take a team out of its preferred game approach. In this case stats tell the story as Colorado converted only 37% 3rd & 4th downs compared coming into the game at 50%…impressive. So we out rushed, out passed, out kicked, out tackled, out pressured, only 2 penalties and won by…4 points??!!

We all know that four turnovers will kill you and we’re just plain fortunate that we produced enough big plays and tenacity to make this a win. My thinking is put this game on the road and we get a really different outcome. We saw the upside of Darnold last week against ASU and also the seed of the turnover problem as he fumble once and throwing more than a few balls late into tight windows. For this game he produced some pretty fun highlights but careless ball discipline brought two fumbles (one into the end zone in the first quarter…ouch in the extreme) and a pick. Frankly if Rogers doesn’t make a spectacular play on his final reception its two picks and we’re in deep kimchee tied at 14 and Colorado with the ball on a sudden change. Again enough big plays were made to offset these 4 takeaways. Colorado is a good solid team and they’ll beat some more folks before this season is over but they’re not in that top echelon of teams…yet.

We played zone coverage probably 75% of the time regardless of LOS scheme also moving away from our recent man coverage tendency. An interesting call I think. With our standard front I’d expected more man coverage but we went strong with zone coverage with an occasional zone up combined with about 25% man coverage by the CBs and Nickel back (on the slot receiver). AJ played a lot of man with Biggie playing zone back frequently. Biggie keeps getting isolated and picked on but he did a better job taking away the deep ball and keeping the seam routs “in front” of him this game than before. He was slightly less reluctant to play “inside” (meaning take away inside slant as a primary read). This helps not just him but the safety to that side since he’s counting on Biggie managing the inside slant first then other receiver or RBs into the flat.

What was clearly the planned for this game; 1) stop the run on first down including QB 2) force longer yardage 3rd down conversions 3) max pressure on the QB and LOS and 4) make some big plays. A good well thought out and executed plan which worked out especially well in the first half as the defense gave a clinic to the Buffs on pressure, angles and nickel packages on 2nd and 3rd downs.

I also noted with great enjoyment a much more aggressive and physical play by most players on defense. Hutchings was fired up and flying around, AJ making tackles (and a jaw-dropping pick which was really timely), Green and Stevie banging around the A, B and C gaps getting upfield better, Nwosu playing lights out (his two pass blocks threw Montez into a funk I think…and getting crushed by Porter Gustin helped), safeties coming up strong. Generally assignments were crisp and quick. May not have been right all the time but they were quick with purpose. Good fundamentals and building blocks for future opponents.

Building blocks??!! Whiskey Tango Foxtrot! I thought we played great defense? Almost great but good for sure. Let’s not confuse Colorado with an elite team just yet and our defense still is susceptible to head-banging strong physical offenses with an elite QB and/or RB. It’s the combination of elite QB with good RBs and strong physicality that we have to get a formula for success. What we’ve just seen is the front end of a maturing and purposeful defense that knows what it wants to do and more importantly how to do it. So far we’ve been pretty fortunate with injuries as our depth issues on the DL have not caused issues, LBs ok so far (Cam is still a half step off from last year in my view), Nwosu and Porter are gearing up, safeties are closing faster and our corner play is very interesting (mixed bag but trending up). Btw a welcome to Betiku on his first CFB play (he found out about offensive holding not getting called!).

Final note, while the O-line is improving overall a big piece of that improvement is Chad Wheeler. Wow I was impressed with his play. I think he’s working his way into a Day One NFL situation. Now if we can get more O-line guys down field into the second level on run plays we’ll really make folks take notice.

Kevin Bruce played linebacker at USC from 1972-75 and was a part of two national title teams. He is now a member of the FWAA.