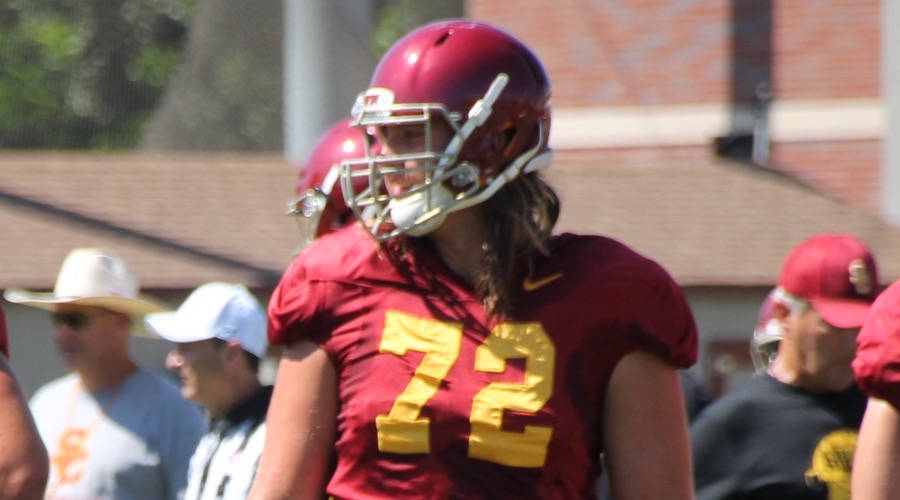 Our WeAreSC roundtable writers give their thoughts on a variety of topics related to the USC fall camp practices.

Garry Paskwietz: I’m going to give it to Stevie Tu’ikolovatu for the way he has filled a huge need. It was a welcome development to see him transfer in the first place but to have him earn the starting nose tackle spot was enough to move him into this award. And I like how Helton has praised his maturity in the DL meeting room too.

Johnny Curren: Max Browne. Emerging as the winner of the most heated, and most watched position battle of fall camp, no player is more deserving of this honor. He performed solidly throughout camp, and he closed the session out with a fantastic showing in the final scrimmage. What impressed me most, however, was his development as a leader, and the way that he commanded the offense each day in practice.

Greg Katz: Although there are a number of candidates that would be worthy of the praise, I am going to cheat and give co-MVP awards to both quarterbacks, starter Max Browne and back-up Sam Darnold. Nobody else on the team had as much scrutiny and eyeballing than these two talented quarterbacks. Neither flinched with all the notoriety and media attention, and when the official announcement came on Saturday, both displayed uncommon maturity and camaraderie for the team and each other.

HelixTrojan: Adoree’ Jackson has made a tremendous return to the practice field in Fall Camp.  He has looked sharp in coverage, which has included several interceptions. On kickoff drills he has looked explosive. And believe it or not, Adoree looks faster after spending the Spring and Summer participating in track and field. He is primed for a big season, and must be one of the Trojan leaders this season.

“Who helped himself the most?”

GP: Max Browne. The stakes were high for Max in this competition. He was the rare elite quarterback who waited three years before getting his chance to start and there would have been a lot of speculation about his talent level, and his future at USC, if he didn’t get the job. Instead, he held off a formidable challenger and earned a lot of respect in the process. Now his reward is to lead the Trojans against the defending national champions in his first start.

JC: Deontay Burnett. He might have been the most consistent member of a very talented wide receiver corps. It was great to see him rewarded for his performance as he was listed as sharing the top spot on the depth chart at the slot position with Steven Mitchell. Now that he’s there, I’m curious to see if he gets a serious chance to show what he can do in games.

GK: I believe the player that helped himself the most during training camp was slot receiver Deontay Burnett. The fact that he was named a co-starter with Steven Mitchell Jr. is a testament just how much his stock has risen in the eyes of receivers coach Tee Martin and head coach Clay Helton. The feeling here is that with this added boost of depth chart confidence, it wouldn’t be a shocker if Burnett played an important role in the Trojans passing attack.

HT: After a Spring session in which he was not named the starter at quarterback, quite a few fans and media pundits thought Max Browne should transfer because the so called writing was on the wall – SC was preparing to go with the younger player, Sam Darnold. But Max took stock in himself, and played well enough in the Fall Camp to earn one of the most coveted positions in college football . . . starting quarterback at USC.

GP: The fact that the defense won more days than the offense. That certainly wasn’t expected to be the case coming into camp with so many returners on offense, and a few key holes to fill on defense. One thing I’m looking to see help the offense come together over the next two weeks is that fact that a starter has finally been named at quarterback, and now we can see Max really settle into the role. It will also help if Chad Wheeler can come back at left tackle.

JC: The emergence of Stevie Tu’ikolovatu and Khaliel Rodgers. The defensive line was a major question mark heading into fall camp, and with Noah Jefferson hobbled with a back injury, the situation could have been dire at nose tackle. Fortunately, Tu’ikolovatu, a graduate transfer, and Rodgers, who flipped from offense, altered the picture here dramatically after they both shined in the practices. It’s amazing when you consider the fact that neither player was a factor in the equation a few months back.

GK: The most surprising development was just how quickly defensive tackle Stevie Tu’ikolovatu, the current grad student and former Utah defensive lineman, established himself after putting on the pads. Granted the Trojans were in great need of defensive line help, but Stevie has more than shown credibility in being a force in the middle over center. We’ll soon see if Alabama is as surprised with Tu’ikolovatu as were the Trojans offensive lineman during training camp.

HT: No academic casualties. As an observer of many Trojan football off-seasons, there has always been the unpleasant news that one or more incoming or current players are academically ineligible for the Fall. When this happens, it hurts depth at a position, and it is usually a devastating set-back for a player with enough talent to make a contribution. But this Fall, Coach Helton delivered the news that there were no academic casualties for the Trojans. Truly great news to begin a season.

GP: We’ve talked a lot about how this tight end group should see an increase in production this year and I think Daniel Imatorbhebhe is going to be a big part of that. He’s got a thick frame at 6-4, 240 and he moves really well. Daniel can be one of those traditional match-up problems for the defense with his dual abilities as a pass-catcher and a blocker.

JC: Jalen Greene. Having lined up at quarterback this past spring, Greene switched back to wide receiver this past summer, and I thought he had an outstanding camp as he proved to be an extremely reliable option there. He’s such a natural, he honestly looks like he’s been focusing on the position for years, when that obviously isn’t the case.

GK: The under-the-radar-player to watch is true freshman offensive tackle E.J. Price, the native Georgian. While Price is still learning the game and a bit raw for this new level of play, he is quickly establishing himself as a future force, who gets better with each time out. He has the athletic ability and desire to push the depth chart, which currently has him fighting with Clayton Johnson for the back-up role.

HT: A newly strengthened position, the Tight End spot has received an injection of pass receiving prowess from Daniel Imatorbhebhe, who has looked good this Fall Camp. Trojan fans have been pining for better use of the Tight End in the passing game. And I believe as the season moves along, Daniel will emerge as one of Max Browne’s reliable targets on offense.

GP: What is the status of the physical level of play in the trenches? This has been a primary focus for Clay Helton and so far the answer is an “incomplete” based on the limited sample we’ve seen in camp. But the results will be known soon enough, as Alabama and Stanford don’t figure to waste too much time in testing the Trojans in that department.

JC: Will the offensive line live up to the hype? Neil Callaway’s group is receiving a lot of attention heading into the season, but it’s been hard to get a real read on whether they’re capable of meeting those expectations. Chad Wheeler’s bout with plantar fasciitis has really complicated matters. If he’s sidelined, can Chuma Edoga, who has been lining up at left tackle, fill his shoes adequately? Is this unit, as a whole, ready to take on the likes of Alabama and Stanford?

GK: The biggest unanswered question is just how physical this team really is. Yeah, there was enough contact to see on any given day the offense or the defense take it to the other. That being said, it all becomes relative. The only way to measure the improvement on being physical is to play somebody else. In Alabama, there’s no question Clay Helton and his staff will find out if his “let’s get physical” mantra is wishful thinking or a stark reality.

HT: The foot injury status of left tackle Chad Wheeler, and the ongoing competition at left guard between Chris Brown and Damien Mama has left the final five starting offensive line in question. If Wheeler is not healthy, then Tackle Zach Banner will shuffle to left tackle, and Chuma Edoga steps in on the right side. At guard, Brown and Mama are so close in performance that it looks like both will play a lot. The positive in all of this is that each of these players logged quite a few minutes last season, and can be considered veterans.