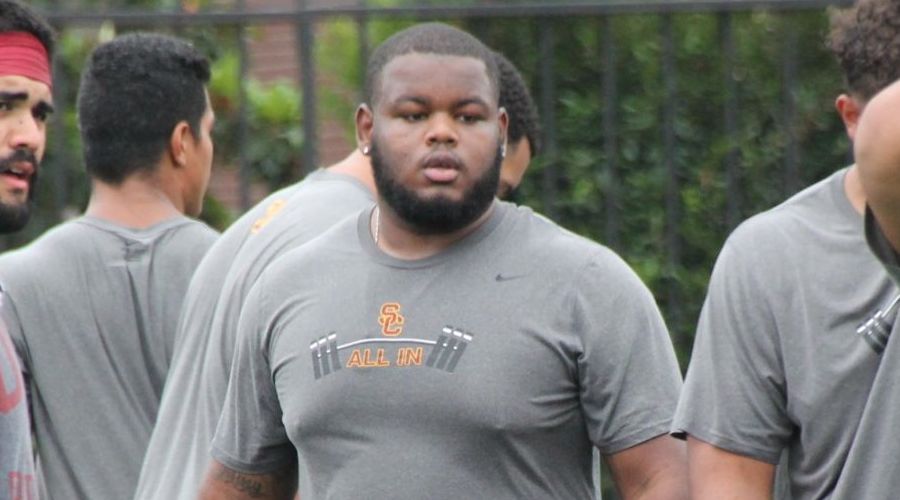 Khaliel Rodgers is the latest offensive lineman to get some work on the defensive side of the ball during summer workouts as the Trojans continue to look at options to bolster the interior of the defensive line.

Chuma Edoga got the first look at making the switch during the opening week, and incoming players Josh Fatu and Stevie Tu’ikolovatu have both made appearances this summer as well, but Rodgers could be a situation to watch because he went to the coaches and requested the opportunity.

“I asked to make the move because I thought it was a better opportunity for me since we definitely need some people at d-line,” Rodgers said. “I went in and talked to all the coaches about it, they took a few days and then gave me the go-ahead. They just want me to come out here and do the best I can so I’ll be bringing the physicality like I always have. I think it will be a great experience for me.”

Not only was it his first appearance at a new position at the Friday workout prior to the 4th of July holiday weekend, it was also the first time Rodgers had taken part in a full workout this summer after missing spring ball due to shoulder surgery.

It remains to be seen if this is simply a temporary look to explore options or if it could turn into a full-time role so Rodgers is planning on continuing his work at center in addition to learning his new spot.

“I’ll be meeting back up with the coaches to talk about how that will go but I’ll still be playing both positions,” Rodgers said. “I actually played my first two years of high school at d-line before switching over to o-line so it’s not that bad as far as learning technique and all that.”

No matter how much the team may welcome the prospect of a 6-3, 315 plug in the middle of the d-line like Rodgers could potentially offer, it’s not an automatic move to take him away from the center competition. After all, Rodgers is the most experienced returning player at the position with six starts last year, but if everyone is healthy the depth should be very good with Toa Lobendahn, Nico Falah and Cole Smith as other options.

“My request to move positions didn’t have anything to do with the depth chart at center, I just felt my team needed me and I wanted to fill the void on the d-line,” Rodgers said. “I will still get my snaps in at center, and stay up with my technique and in the film room. I’m prepared to handle knowing both spots, and it was great the way the defensive guys welcomed me over, they were really happy. They always liked the way I played and to add me to the defensive line they think will be a good thing. They see how I work, they see how athletic I can be. It’s been a pretty good start so far.”