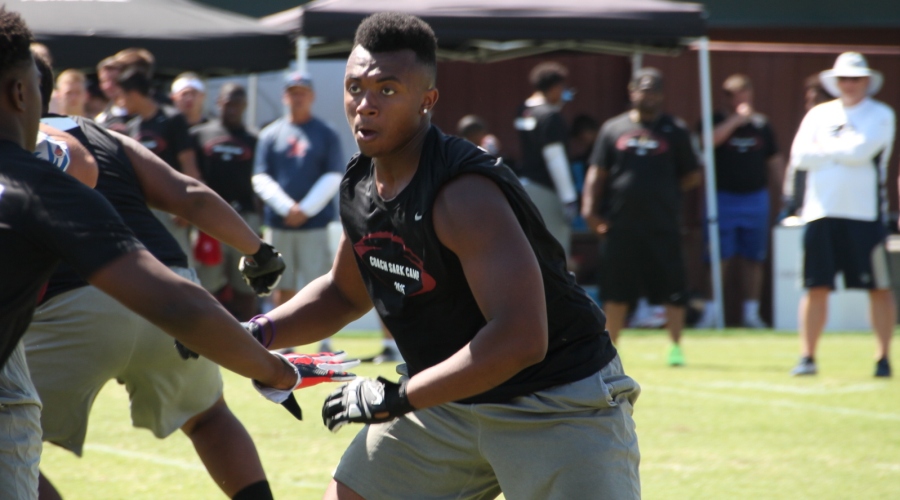 The annual USC Rising Stars Camp will take place on Wednesday and Thursday this week, and there will be a lot of focus on the trenches with some top linemen in attendance.

One of the players who really stood out last year at this camp was Austin Jackson, the talented tackle from Arizona who is a USC legacy with a grandfather who played for the Trojans. Jackson (photo above) looked the part last year when he was at the left tackle spot as a rising junior, and we look forward to seeing where he’s at in his development now.

I’m also anxious to see more of Jalen McKenzie, the son of Oakland Raiders GM Reggie McKenzie. Jalen has basically missed the past two seasons due to transfer and injury so he is as much of an “under-the-radar” recruit as you will find for a 6-5, 300 player with good genes (brother is at Tennessee).

As is usually the case, the southeast region will provide a couple notable campers. Alex Leatherwood is a top-10 national recruit at his position and has been committed to Alabama for a while but you never know what can happen when he gets an up-close look at the Trojan program and campus. 2018 offensive guard Curtis Dunlap (6-6, 340) comes from the loaded IMG Academy and will be an elite recruit next year.

On the defensive line, a pair of local prospects will get a lot of attention. Martin Andrus is a plug along the interior who first came to our attention last year at this camp while Terrance Lang is a versatile big man who reminds me a little of Noah Jefferson. Kevin Oliver and Jordan Wright are a pair of Florida defensive ends who will also be in attendance.

The camp will offer our first live look at USC commit Marlon Williams, the receiver from Alabama. Williams was part of state-winning title teams in both football and basketball last year, and has a reputation for being an explosive playmaker. We will also get a look at local 2018 receiver Chase Williams, who received a Trojan offer after the recent skills camp.

Williams won’t be the only USC verbal in attendance, nor will he be the verbal who traveled the farthest distance for the camp, as Juliano Falaniko from American Samoa is scheduled to be there. It isn’t every year that the Trojans get a commit from Samoa so this will be a good opportunity for an up close look.

One of the top tight ends in the state, Jimmy Jaggers, will be at the camp and he brings a physical presence to the position with a 6-4, 245 frame.

Jaylon Johnson is one of the two best corners we’ve seen this spring along with Darnay Holmes, and we can’t wait to see him matched up against some quality receivers. He will be joined at corner by one of my favorite sophomores from last year, Olaijah Griffin from Mission Viejo. Griffin receives a lot of notoriety as the son of Warren G but he brings his own skills to the table as an aggressive corner with size. A pair of southeast players in the secondary will include Tre Swilling and Derrick Smith.

The Trojans added a verbal commit this week when safety C.J. Miller announced via his Twitter account that he would attend USC.

Miller (6-1, 190) comes from the same school as Chuma Edoga (McEachern HS in Georgia) and had a chance to work out in front of the USC coaches during recent satellite camps before an offer was extended last week, and then quickly accepted.

Miller is the 2nd safety commit in this class, along with Bubba Bolden, and the Trojans now have 9 commits for the class of 2017.

There were a bunch of offers with the USC skills camp over the weekend, primarily with underclassmen.