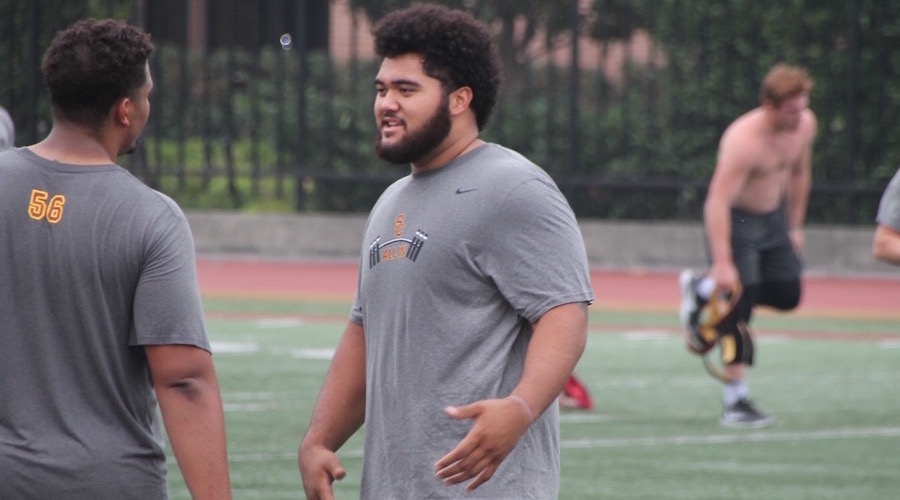 In this week’s mailbag we talk Lynn Swann priorities, the use of the fullback, darkhorse players to shine this fall and the position status of Chuma Edoga.

Who is your dark horse player to perform this season on offense? Defense?

On offense I’m going to go with tight end Tyler Petite. He’s probably the best receiving option we have at the position and I think there’s going to be more involvement of the tight end in the offense, which means more opportunities for catches. For defense I will say either DE/OLB Uchenna Nwosu or safety Chris Hawkins. Nwosu looks like a natural fit for the edge rusher spot in Clancy Pendergast’s defense. Hawkins very quietly was the 3rd leading tackler on the team last season in his first year playing a new position and he looks very comfortable now at safety in summer workouts as he returns from ankle surgery.

Garry Phil Steel has Kylie Fitts as a first team all Pac 12 player..That’s gotta sting a little bit. What’s the story with his recruitment?

It was a sanction year with only 15 rides, and Kiffin was trying to delicately balance things, but it turned out he had a chance to add a verbal from Leon McQuay that would have put the Trojans at 16 rides. As Kylie was out shopping from dorm supplies to move into his campus housing as an early enrollee, he got a call saying SC no longer had an EE ride for him. It was obviously a stunner for Fitts, and one family member said if Kiffin had been honest and asked for volunteers to wait until the fall to enroll that Kylie would have been the first one with his hand in the air. As it turned out, the way it was handled ended any chance of Kylie sticking it out with the Trojans, and he ended up elsewhere. Good kid, good player.

What happened to the rest of Damien Mama? Does he really look 325?

As you can see from the photo at the top of the page, Damien has definitely trimmed down from where he was the first two years. We aren’t able to interview players for another couple weeks but we will talk to Mama when we can about how he got here, how he feels, any impact on his game, etc.

Are we completely out of the Scholarship penalty years … and the effects? How long was it actually vs. officially?

Yes, all official elements of the sanctions are done. That’s the good news. And with a couple 25 man classes under the belt it feels like a normal roster size when watching the team practice these days (82 of 85 rides are being used). One lingering effect this year is the lack of depth along the d-line interior as that was one position during the sanctions where there were some misses and they are being felt now. So if there are still lingering issues, you can say the cloud of the NCAA investigation and penalties has hovered for 10 years, as the original Yahoo story on Reggie came out in September of 2006. The actual penalties were handed down in 2010, with the bowl ban being served for the 2010-11 seasons, and the scholarship reductions in place for the 2012-14 classes.

Name soon to be AD Swann’s top three athletic program priorities on his agenda in your opinion?

I would think one of the first items on the agenda will be the Coliseum, with most of the emphasis coming in a fund-raising role. With his fresh voice coming in, however, there is at least hope that the Scholarship Club Tower will be re-evaluated under his regime. Next I hope he begins to immerse himself in the relationships with the various conference, media and marketing partners to see where the USC position can be strengthened and improved. Finally, there is the under-the-radar thought of USC possibly pursuing relief in some way against the NCAA for the sanctions if/when there is a favorable resolution in the Todd McNair case. If this does happen, I would hope he is a major part of the charge. One more big priority for him will be evaluating the department personnel and coaches, although that is something that will take place over time.

FULLBACK; we are talking about moving people around to cover weak spots, but Peters is going to need relief. Can we possibly design a new scheme around not using the position? If so, it’s not going to last and someone will have to move over there. Perhaps a TE or ILB?

We haven’t seen any signs of another body moving to fullback and right now I would expect it to be Peters as the only person in that role. I don’t see the fullback being used every snap so it’s not going to be full-time, and it will be primarily blocking with some pass catching duties in there as well.

Garry I was wondering if USC is considering using the virtual reality system that Stanford has used. It seems like a great tool for the QB’s to use and would be good for some of the other position groups as well.

Helton met with the virtual reality company last fall after getting the interim nod and he had them come out to a bowl practice in December to film Kessler and the other quarterbacks in action. He also talked in spring about the benefits of the technology although he didn’t give specifics on how USC might use it.

Austin Jackson, Curtis Dunlap, Jalen McKenzie and Terrance Lang are some of the line names we’ve seen as scheduled to attend.

I’ve read that Chuma is experimenting playing on the DL. Is this true? USC needs more bodies on the DL, IMO.

He was there for the first week of the throwing sessions but was back at right tackle this week. Helton has said he would like to see another body or two on the d-line, it may end up being Chuma or it may end up being others but I think the lack of depth gets addressed one way or the other.

What do you know about DJ Johnson the DE from sac? Kid is a rare talent. Do you know his interest level in USC?

He’s a legit DE but he’s also been one of the more quiet recruits this year in terms of not attending many camps or giving many interviews so there isn’t a ton of info out there on him. D.J. has interest in both LA schools and he’s mentioned SEC schools such as Ole Miss, Alabama and Florida.

Do you get a sense of who the guys are gravitating to as a leader max or Sam?

No, I don’t really see anything from the players in favor of either guy. Max is the one taking more of the vocal role leading the summer workouts but that is to be expected with him as the fourth-year guy who knows the system so well. I also think that is one of the checkmarks in Max’s favor in pursuit of the job, it’s not a knock on Sam, it’s just reality that he’s only entering his 2nd year while Max has that benefit of more time in the program.