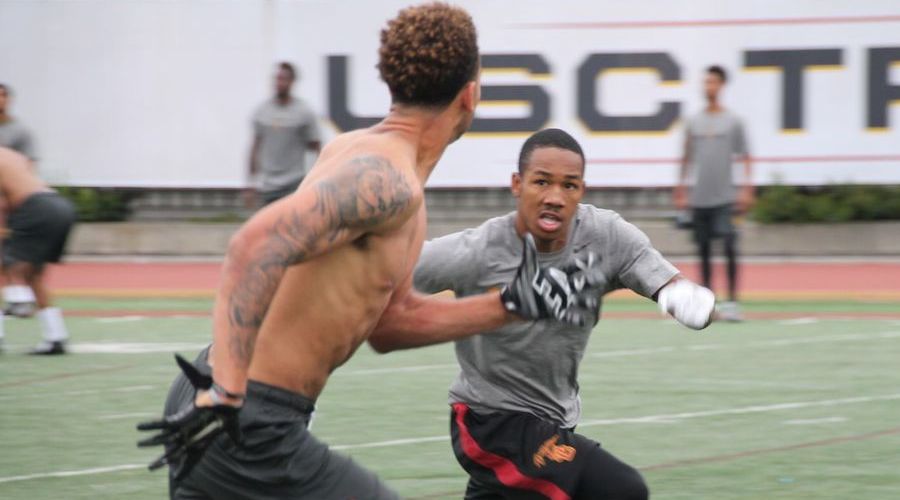 The Trojans have wrapped up one week of summer throwing session and here are some initial thoughts after the first two workouts.

* QB’s came out strong: With the competition for the starting job still open, both Max Browne and Sam Darnold have looked good in the early practices so far. Browne is taking the first reps and he’s the one leading the drills but they are splitting the reps fairly evenly. As is usually the case with Max, his deep ball is particularly strong. Sam is jumping out to me with his strong arm, he’s really throwing the ball well. It hasn’t been perfect, there were 4 interceptions on the opening day, but it’s still a case of two guys playing well rather than a battle between two guys who aren’t stepping up.

* Chuma at defensive end: There was a lot of chatter since spring ball about the possibility of moving an offensive lineman to the defensive line considering the lack of depth on defense. In all the speculation, however, Chuma Edoga isn’t a name that was being tossed around much. Edoga got a lot of playing time last year as a true freshman reserve at right tackle and his future was thought to be bright on offense. But these are desperate times in regards to DL depth, and Edoga brings a lot of athleticism to the table in his 6-4, 290 frame (his SPARQ testing score for The Opening when he was in high school was 99.48 with a 4.86 40 and 4.46 shuttle). Edoga will join Christian Rector in lining up behind Rasheem Green, while Nathan Smith moves into the #2 RT spot with E.J. Price also a possibility in the fall.

* Additions to corner depth: You can never have too many corners while playing in the Pac-12 and there were times in spring when the Trojans were definitely hurting for depth at the spot. Ajene Harris was eventually moved from slot receiver, and true freshman Jackie Jones was expected to come in and contribute immediately. Well, based on what we’ve seen through the first week (including a first day when they each had two picks, one that was returned for a pick six) these two should be able to be counted on right away. Both are very instinctual football players as evidenced by the fact that they could end up playing multiple positions, including the return game. They are also confident in their abilities, which is critical for corner. Jones (photo above covering Michael Pittman) also adds that “it” factor you want to see in your big-time players.

* Using the tight ends: One of the things a lot of USC fans want to see with this offense is an increased use of the tight end in the passing game, especially now that there are some good options. We’ve only seen Taylor McNamara and Tyler Petite through the first week as Daniel Imatorbhebhe has been sidelined, but the good news is that McNamara and Petite are seeing some good action. McNamara in particular seems bigger in the upper body and Petite shows the growth you hope to see from freshman to sophomore year. So far so good in terms of liking what I see in getting the tight ends more looks.

* Freshmen receivers: There are a lot of expectations from this group and they are showing themselves well. The two who enrolled early are ahead of the others as Josh Imatorbhebhe and Michael Pittman are more familiar with their surroundings, and it shows. These are two “big” receiver options, Imatorbhebhe plays with a more physical style while Pittman brings such length. I also liked the way Trevon Sidney came on the field Thursday for his first session and immediately started making plays from the slot. Tyler Vaughns looked good too although he had to account for a uniform change as well.