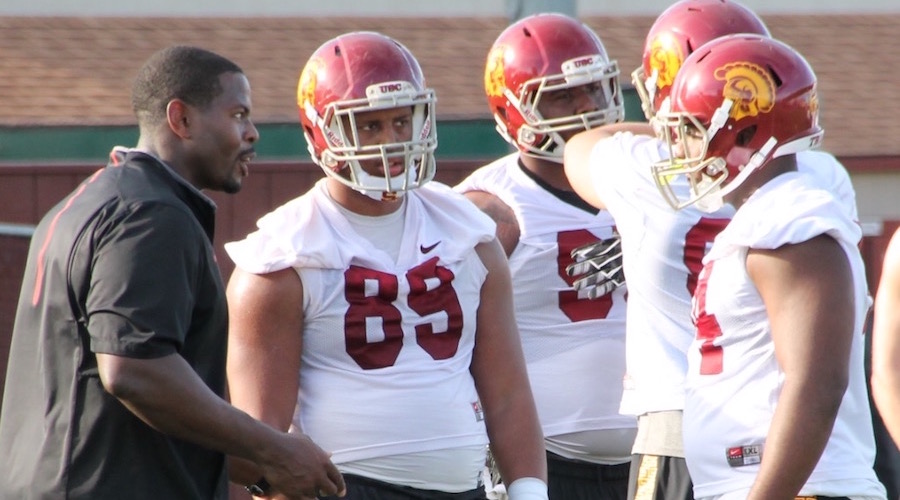 In this edition of the weekly mailbag we talk about defensive line depth issues, the most athletic players on the roster, draft predictions and uniforms:

How serious of a problem is the lack of depth at DL?

Helton called it the #1 thing that keeps him up at night in a media call this week, and I agree with him. I like the future of the group a lot (especially with Kenechi Udeze as their teacher) but there is just a lot of inexperience now, and an early schedule that will not be forgiving of youth.

The current two-deep has DE (Green, Rector), NT (Jefferson, Daniel) and DE (Dorton, Scott) and between them they have 47 career tackles, with 42 of those coming last season from Jefferson and Rasheem. In other words, you’re basically needing the entire group to step it up a notch, not only do the reserves need to contribute but Rasheem and Noah need to develop into steady producers. The good news is that Rasheem is clearly talented enough, and so is Noah as long as he can stay healthy. As for the depth, Daniel is going to be fine but the overall success of the reserves will likely hinge on how quickly Rector and/or Scott can develop. And you never know what Josh Fatu can bring in the fall.

Who is the most athletic player that we have in each and every position? Who is the strongest guy on the team?

WR: JuJu Smith-Schuster (used to play rugby) ** keep an eye in future on J Imatorbhebhe and his 47” vertical leap

LB: Porter Gustin (played QB in HS, threw 93 MPH as pitcher and took 3rd in state for javelin and shot)

DB: Adoree’ Jackson (anybody else gunning for the Olympics?)

This isn’t based on any weight room marks but I would vote for Viane Talamaivao, you’re going to have to prove to me somebody is stronger than he is. He also provided a solid beat for The Elevator Rap.

Garry why does it seem like Oregon is always one step ahead of us? Example they need a QB they get a graduate transfer 2 years in a row. We need a few DT’s and can’t seem to find one?

It’s hard to believe that with all the JC’s, small D1 and D2 schools out there all over the US we can’t find 2 guys that could help fill the void at a position of need.

Last year the Trojans were in real need of a tight end after the losses of Dixon and JCF, and a graduate transfer came in the form of Taylor McNamara, who ended up starting and playing a steady role. I would love to see something similar happen on the DL, and I’m certainly not ruling it out yet.

Garry, Do you think that Soma Vainuku will be drafted? If so, by whom?

This one can go either way. I sure hope Soma will be drafted, and if it happens my guess is it will be by a team with a history of identifying value in guys like Soma. A team like Green Bay, New England, Baltimore, Seattle, etc.

Draft predictions? What round do you see the Trojan prospects being drafted and where do you think the best possible fit (team) is for Su’a?

I think Su’a would make a great Raider.

Gut feeling, is Tua long gone? If so, who do you see as backup options?

No, I don’t think Tua is gone yet. I understand Alabama is now a legit option but there are a lot of longstanding feelings for USC too. As for back-up options, let’s revisit on May 3rd to see if this is something we need to worry about.

Is it reasonable that one injury (Bigelow), is enough to change the narrative to being too thin at DL and able to change the HC’s decision to not have a real Spring Game? I find that to be a stretch…if we were really that thin…then this was a perennial failure in recruiting/development. Sanctions were too long ago to blame that. Every team has injuries…all of sudden, an injury to a player that hasn’t even played for us very much has the program in panic-mode? Something doesn’t add up there.

Bigelow was out and Jefferson had just returned from a back issue, but Helton is the only one that can talk about how that impacted his decision to alter the spring game plans.

With Bigelow, his loss not only removed one of the starters but it also removed the leader of the group, and that’s critical. Helton was quick to praise Kenny during interviews heading into spring about his maturity and how much that meant. Now that maturity will need to come from the sidelines as “Coach” Bigelow for a group of guys where the majority has only been on campus for 8 months. To me, this is where the sanctions are still a factor. The d-line group is void of upperclassmen outside of Kenny and the current RS SR and RS JR year were the last two classes under sanctions. With 10 rides per year being gone, for a total of 20 rides, it’s easy to imagine anywhere from 2-4 more DL on the roster if those scholarships are available for those two years. I would gladly take 2-4 additional upperclass DL at the moment.

Garry, we have all heard the intent to be more physical, less Hollywood, and more blue-collar. Is the situation with Damien Mama being reflected across the rest of the team? In other words does it seem to be our new coaching culture that playing time, and a starting position must be earned? Or is it only Coach Callaway who is just that salty?

I’m sure Max Browne would say the current coaching culture reflects that starting positions must be earned.

Garry with the new logo change and tons of black merchandise availability in the student store when can we expect an alternate football uniform?

Count me as one who hopes that does not happen. I love the fact that our jersey has always remained in our primary colors, and without the last name of the player on the back. Of course, I also celebrated the return of white socks at the end of last season, so I would definitely be considered a traditionalist when it comes to the uniform.

It’s a pretty sad statement about Oregon recruiting and planning when they had to pull in a transfer at quarterback 2 years in a row. We’ve got 4 solid QB’s in our system.

So yeah, in their desperation they’ve gone out and found a one-and-done QB fix, but that’s hardly evidence that they’re ahead of us in any capacity. Our D-line is thin, thin, thin. But comparatively, not landing a quarterback is inexcusable. They got lucky with Adams, but it’d doubtful they’ll continue to luck out like that.

If we are comparing desperation, I think we are in much better shape. It’s also a statement of how rare good d-linemen are out there, both graduating from HS as well as coming out of the Junior College ranks.

I think the recent QB recruiting at Oregon is really interesting. They built the offense under Chip Kelly with guys who weren’t really highly recruited (Jeremiah Masoli, Darron Thomas, Marcus Mariota) and when they were able to get some Elite 11-level recruits they missed on a few (Jake Rodrigues, Morgan Mahalak) and now I still don’t think they have their QB for the future on the roster.

Could Helton’s reluctance to name Browne the starting QB be a result of wanting to change to a read option style of offense? If this is a possibility, would Darnold be the better fit?

Until we see the offense in action it’s hard to know exactly how much read-option will be used but yes, if you are going to commit to that style, then Darnold fits the skill set as well as anybody. I don’t think that is the case for this particular competition but it is notable that the QB’s on the depth chart behind Browne right now all bring more running skills to the table, as does 2018 QB commit Matt Corral.