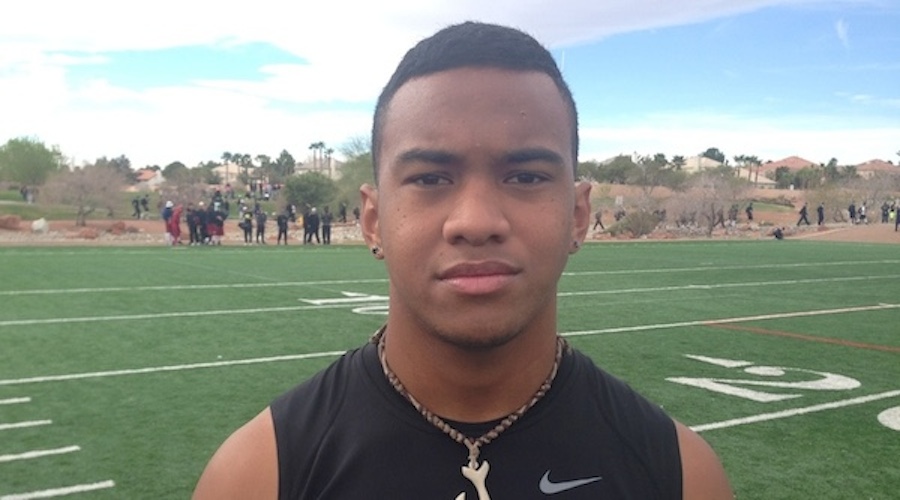 The USC coaches are on the road for the spring evaluation period, a time where the coaches are allowed to visit the campuses of recruits, and it’s always a time for movement in terms of offers and potential verbal commitments. Here’s a look at some of the keys for the Trojans during this period.

With the news that top QB target Tua Tagovailoa (photo above) will make his college announcement choice on May 2nd it now becomes a waiting game for the Trojans. It’s been made clear over the past year or so that Tagovailoa was the top choice of the SC coaches, both when Clay Helton was an assistant and as head coach. And for the longest time it looked like that interest was mutual as Tua made no secret of the fact that the Trojans were his top choice as well. That was even the case as recently as an on-campus visit earlier this spring with several family members present, and all signs were still pointing to USC as Tua made plans for a southern trip that would include visits to Alabama, Auburn and Ole Miss. Since that trip, however, it would appear that the Tide made a real impact and it would be wise not to be dismissive of the defending national champs in a recruiting situation like this.

When it comes to running back commits, Stephen Carr is still calling himself a soft commit to the Trojans but it’s hard to get comfortable about where things stand when Carr is traveling across country for a visit to Miami instead of attending the USC spring game. The Trojan coaches have noticed, and they are staying on top of Carr every step of the way, as Carr told Johnny Curren that he is in daily contact with the SC staff. This is particularly notable because lack of contact with the coaches was a key reason cited by Thomas Graham, a 7-on-7 teammate of Carr, when he recently de-committed from his longtime SC pledge.

It’s no secret of the recruiting needs on both sides of the line for this class. The good news is on the offensive side as the west coast is loaded with several top prospects considering the Trojans, including names such as Wyatt Davis, Austin Jackson, Henry Bainivalu, Aaron Banks, Chuck Filiaga and Brett Neilon. All are ranked in the top 25 nationally at their position. There are a trio of highly ranked defensive linemen in the west as well with Martin Andrus, Greg Rogers and Jay Tufele, plus it will be interesting to see if the coaches get any big-name OOS linemen to visit for the Rising Stars Camp.

The Trojans have a pair of verbals from OOS receivers Marlon Williams and Randal Grimes, and by all accounts they both bring a very good skill set to the table. But there are also some elite receivers in the area who have shown legitimate interest in USC so it will be important just to remind guys like Tyjon Lindsey and Joseph Lewis just how important they are to this class for the Trojans. Getting wide receivers hasn’t been a problem lately so you have to imagine things will work out here.

In search of a fullback

Helton has said that he would like to have a fullback on the USC roster, and the spring move of walk-on fullback Reuben Peters seems like it is going to stick for now, but with so many high school teams going to spread offenses there is a lack of true fullbacks on the recruiting trail. So don’t be at all surprised if the coaches move quickly if they see one that they like.

How many more linebackers?

After taking only one linebacker last year it looked like there would be a need to load up in this class but it doesn’t look to be a particularly strong year at the position, and we’ve seen the coaches adjust by grabbing a pair of 2018 backers and then reaching to American Samoa for a 2017 verbal in Juliano Falaniko to kick off the evaluation period. There are two in-state offers right now for this class in Addison Gumbs and Sampson Nui, along with 2018 names to watch in Merlin Robertson and Solomon Tuliaupupu.

With the Graham situation up in the air right now there is still a need to get at least two corners for this class. You don’t want to rule Graham out right now because there is a chance he ends up in the class but you also have to be prepared for the possibility that he ends up elsewhere. Jaylon Johnson from Fresno is one in-state candidate and now it comes time to identify others on the wish list.