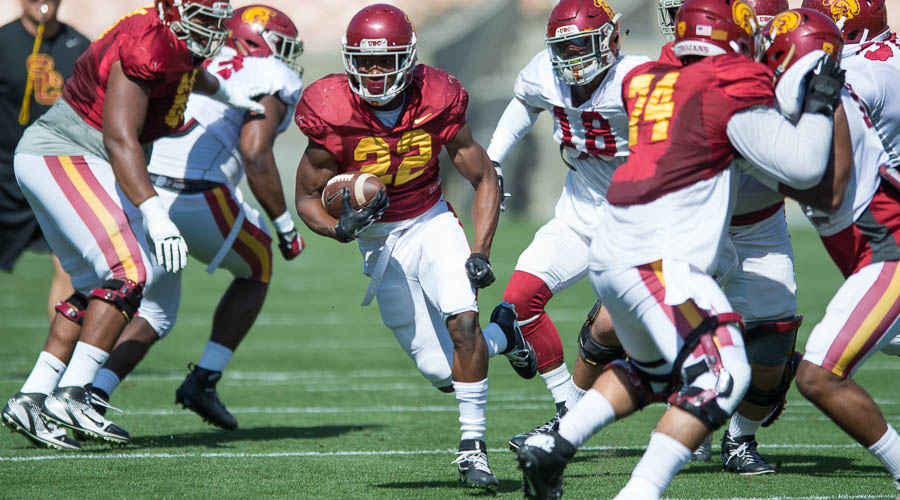 The Trojans will hold their annual spring game on Saturday in the Coliseum at 3:00 p.m. and it will be televised by the Pac-12 Network. It will be the first spring game for Clay Helton in his new role as USC head coach and it figures to offer more than the various practice drills that have been the norm in recent years as the Trojans battled scholarship numbers.

There is also the matter of the spring game playing an important role in determining whether or not Helton will name a starting quarterback now or wait until fall camp. He has said he wants to see how the quarterbacks fare in live action on TV in front of the Coliseum fans so that figures to mean increased live scrimmage situations for Trojans to enjoy. And with that, we give you some key items to watch for in the spring game.

As we sit here today, Max Browne is considered ahead of Sam Darnold in the competition for the starting job. Max has done a consistent job of being a veteran game-manager, a player who knows what is supposed to be done at all times with the offense. And while Max has made his share of plays as an accurate passer, the coaches will usually mention the game-management aspect when talking about his performance through spring. With Darnold, they are clearly impressed with his ability to make plays even when, according to the coaches, he doesn’t always know what he is supposed to be doing. Sam has really stepped up his game in the last two weeks and there are times, such as his appearance in a series with the 1’s last Tuesday, where he just stands out.

It makes for a pretty tough decision for Helton if he is to make a decision shortly after the spring game. While Max is ahead, he’s not ahead by a wide enough margin to make it a clear cut decision. There’s always a chance for that to change if Max wows everyone on Saturday but for now Sam is really too close on his heels to make a call. Helton has said he will either make a decision next week or announce that he will wait until fall camp. It’s clear he would prefer to do it next week but he also added that the goal is to have a starter for the first game so he will wait if he has to.

Because there will be such an emphasis on making things are realistic as possible for the quarterback competition element, it stands to reason there will be a decent look at what the coordinators have installed so far. For the offense, this will be the first look at Tee Martin handling the play-calling duties and there will be a lot of attention paid to any differences in formations, tempo, pass patterns, etc. On defense, Clancy Pendergast will make it a point of emphasis to bring pressure in an attempt to get in the backfield and disrupt the quarterback. The coaches obviously won’t show everything in a televised scrimmage but they will have to show enough if they want to judge the players in a live-game situation.

Playing directly into the matter of offensive play calling is the ability to establish the run game. Helton says he wants to be able to run the ball when you need to run the ball, especially at those times when your opponent knows you need to run the ball. The Trojans have the backs to do it, as Justin Davis (photo above) and Ronald Jones looked every bit this spring like an elite 1-2 duo, and Aca’Cedric Ware has shown that he is ready to get into the mix when needed. Helton has made it a point to recognize the physical running of Davis as something that has stood out.

Then there is the offensive line. If ever there is a time for the line to step up, this is it. Two senior veteran tackles. Four talented guards in the rotation. And with the top two centers on the depth chart out for spring, the next two in line showed a lot. The message from all that is depth, the Trojans have a lot of bodies to work with, and they think they have the right coach to mold them in a physical fashion with Neil Callaway. There is nothing flashy about Callaway, an old-school southern football coach who hangs his hat on his players being tougher than the man across from them.

As mentioned earlier with Pendergast, one of the most notable things we’ve seen from the defense is the various ways he will look to bring pressure. Helton commented on it multiple times this spring as something he remembered from Clancy’s previous tenure and he’s clearly happy to see it return. The two OLB’s will be critical, with Porter Gustin and Uchenna Nwosu serving as the starters throughout spring. Gustin was expected to play a leading role while Nwosu has been somewhat of a surprise but he has been making his share of plays. Along the interior, the loss of Kenny Bigelow was a blow but Rasheem Green is stepping into a primary role and one name who has been a pleasant surprise is Malik Dorton, he’s got a quick first step to get in the backfield. As for the inside linebackers, there has been no Cameron Smith as he rehabs from his knee and it’s been Michael Hutchings who has been with the 1’s the entire spring. Hutchings looks revitalized under Pendergast, as does Quinton Powell.

It remains to be seen what kind of field goal work will be done on Saturday but a there are a lot of Trojan fans who want to get a look at new placekicker Matt Boermeester. The lefty has a solid leg, not overly long range but he’s been fairly consistent for the majority of spring from mid-range.