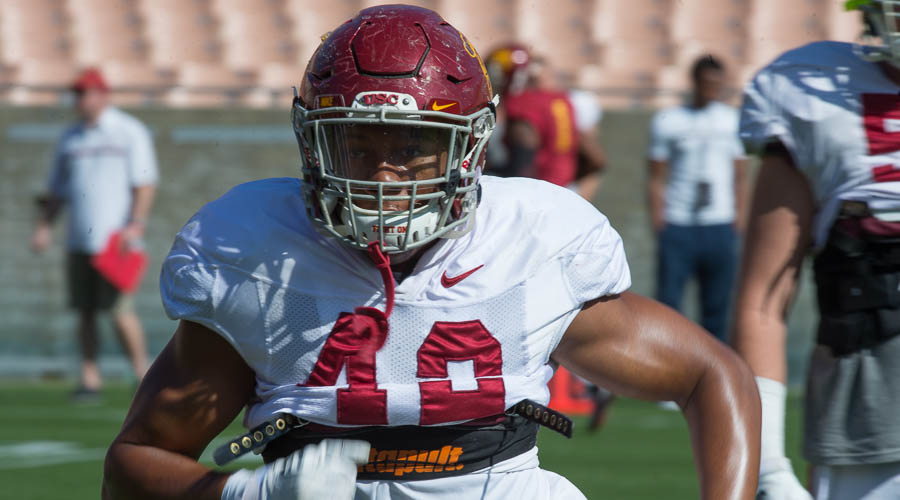 Week 4 of USC spring ball practices are complete and there is just one week left to go, including the spring game on Saturday at the Coliseum. Here’s a look at some of the top storylines from the last 3 practices:

Defense bringing pressure: One of the key themes of the week was the defensive pressure brought by Clancy Pendergast and company. It figures to be one of the strengths of the defense, and we’re starting to get a sense of how some of the players may fit into the Pendergast system. I don’t think too many people would have had Uchenna Nwosu (photo above) pegged as one of the stars of spring but he has maintained the starting OLB spot throughout spring and appears comfortable in the role. Along the interior, there has been a lot of hand-wringing about the depth, particularly with the injury to Kenny Bigelow, but Malik Dorton is showing that he has the kind of quick first step that can allow him to get into the backfield. We knew guys like Porter Gustin and Rasheem Green would be ready to go but it’s nice to see a few spring surprises as well.

Ajene at corner: This could prove to be an important position switch if it sticks. The depth at corner is not as worrisome as the interior of the d-line but it’s not far behind in a conference where so many teams have multiple receiver sets. Adoree’ Jackson has been out all spring due to track commitments, and Jonathan Lockett has been limited due to concussion protocol. That has left Iman Marshall and Isaiah Langley as the available scholarship corners, until last week when Harris flipped from offense to defense. Ajene is such a natural at everything he does on the football field that it shouldn’t be a surprise to see him doing as well as he has in the first few days, and it wouldn’t be a shock at all to see him getting reps there in the fall.

QB update: It wouldn’t be a spring update without some news on the continuing quarterback competition, and for the second week in a row it was Sam Darnold stealing the headlines from Max Browne. Clay Helton is still saying that a decision on a starter could be reached at the end of spring while he also continues to compliment the way Darnold is making notable plays. He’s also quick to point out the things Browne does as well but it’s clear that the “gap” which was present earlier in the spring when Helton said that Browne was “ahead” in the competition has shrunk quite a bit.

OL still rotating at guard spots: Right now the tackle spots appear pretty set, if Chad Wheeler and Zach Banner are healthy they will likely be the starters. And Nico Falah remains the starter at center, even if Toa Lobendahn will probably be inserted there in the fall when healthy. But the guard spots continue to rotate the first team reps, with incumbent starters Damien Mama and Viane Talamaivao seemingly splitting time with the 1’s with Chris Brown and Jordan Simmons. It’s understandable to give everyone a look for a new coach but we’re in the final week of spring and nothing is set yet, that’s just a little surprising for a position group where familiarity of playing with the same faces is so important.

There’s no tradition like SC tradition: It was quite the scene on Saturday at practice with the group of former Trojan players who had gathered to show support for the current team. Heisman Trophy winners, national champions, Notre Dame killers, 55’s, they were all there. The group was organized by Helton to remind the current players of the bar that has been set by their “big brothers”, and Helton was one of the people who stayed until late in the afternoon at Galen dining center to hear stories from Trojans past.

Future Trojans: USC received a pair of verbal commitments from linebackers in the 2018 class last week when Bo Calvert from Oaks Christian and Raymond Scott from Narbonne announced their commits. Calvert is a rangy 6-5, 215 OLB while Scott is a punishing 6-1, 220 inside backer.