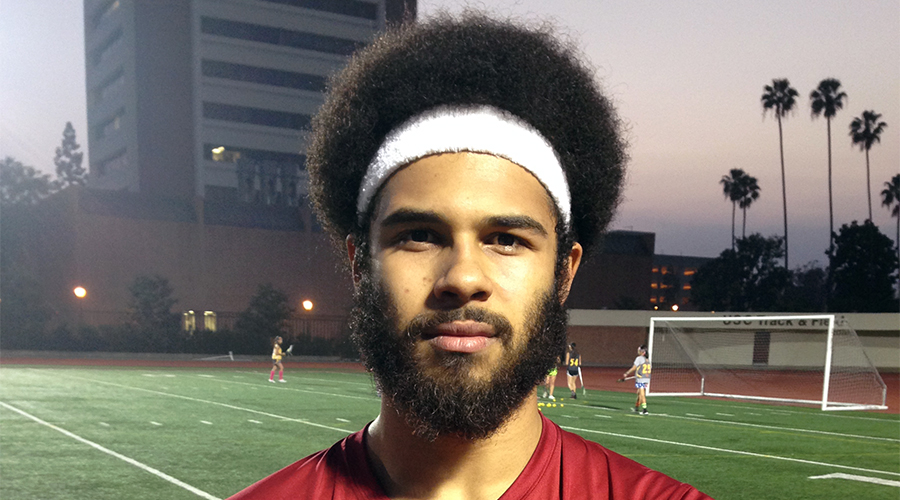 USC junior tight end Jalen Cope-Fitzpatrick took part in the Trojans opening spring ball practice on Tuesday and it was his first session back after sitting out the 2014 season due to academic ineligibility. Cope-Fitzpatrick was the only scholarship tight end available for the practice with Bryce Dixon missing due to a student conduct issue so there was plenty of work for JCF and walk-on Connor Spears. We talked with Jalen afterwards to get his thoughts on the day.

WeAreSC: How did it feel to get back out there on the field today as a full participant in a team practice?

JCF: It was great, absolutely. I love football and after this long break it feels great to get back out there with my teammates.

WeAreSC: Tell us where you’re at physically right now.

JCF: I’m 6-4, 245 which is pretty much where I was at last year but physically I can get a lot stronger. I’ve only been lifting with the team for about three weeks now so there is definitely room for improvement. I was able to do some stuff by myself last fall but it’s a lot different when you’re running sprints and you’ve got the coaches pushing you.

WeAreSC: What are your goals for this spring?

JCF: I want to get my feet wet again this spring, just get back with the offense so I can be crisp with that again so I can play fast. It’s about re-connecting my mind and my body, just getting my technique right again because I haven’t been in cleats and a helmet since October, it’s been a while.

WeAreSC: What are the coaches saying in terms of what they’re looking for from you?

JCF: They’re looking for consistency and dependability. I learned a lot from Randall (Telfer) in how to be that way every week, being an aggressive blocker, getting downfield, so I really want to model my play after Randall and the guys that came before me in terms of being dependable.

WeAreSC: What was the hardest part of having to sit out last season?

JCF: Watching the games, just really wishing you could contribute, especially in some of those tough losses. It is what it is. I’m doing well in school right now (American Studies major), going at it with all A’s, I had a midterm earlier this week and I want to stay consistent with that.