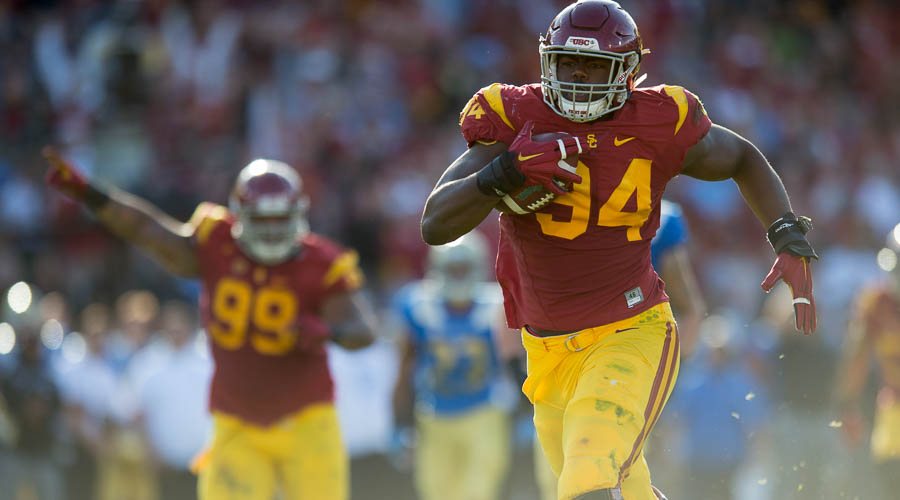 Here are five defensive questions facing the USC defense this spring under new coordinator Clancy Pendergast. While the Trojan offense has plenty of returning firepower, the defense will be looking to fill more holes in spring for departed players.

Who is ready to step up along the interior of the line?

One of the benefits of the rotating that was does along the line last year is that a lot of the young players got experience, and that should pay off now as they begin to position themselves for starting roles. All three of the interior spots are open right now and it will be very interesting to see who emerges this spring. You have to imagine Rasheem Green (photo above) is going to get one of the first looks based on the way he was playing at the end of last season, and it will likely be at one of the two defensive end spots. Others in the rotation at the end spots will include Malik Dorton, Kevin Scott and Christian Rector. There will also be a nose tackle with Jacob Daniel, Noah Jefferson and Kenny Bigelow all being potential candidates. Those are plenty of bodies, now the Trojans just need to start seeing some of them step into the starting spots.

Same question at outside linebacker.

There might not be a more critical position in the Pendergast defense when it comes to applying pressure in the opposing backfield. In 2013 under Pendergast, the two OLB spots combined for 17 sacks and 29.5 tackles for loss between Devon Kennard and the combination of Morgan Breslin and J.R. Tavai. This year, Scott Felix is a returning starter but he hasn’t done enough to think his spot is safe with a new staff in place. There will definitely be a challenge from Porter Gustin, along with Don Hill (who showed some flashes at the end of the year in addition to his big penalty at the end of the bowl game), Quinton Powell, and you have to wonder if this is the time for Jabari Ruffin to get in the mix. Spring ball will also see Oluwole Betiku, an early enrollee who will be given every opportunity to show if he is ready. Another wild card could be Osa Masina, who could be at the OLB spot or possibly at ILB.

Who will be available at inside linebacker?

With Cameron Smith out for spring drills while rehabbing a knee injury, the Trojans might be short some bodies. Olajuwon Tucker will certainly be at one of the starting spots, and Michael Hutchings is available as well. Will this be the eventual spot for John Houston when his back is healthy? As mentioned above, does Masina get a look here? Don’t be surprised if walk-ons Joel Foy and Reuben Peters get plenty of reps this spring.

Who can take advantage of Adoree’s absence?

With Adoree’ taking part in track & field, there stands to be a lot of opportunity for Jonathan Lockett and Isaiah Langley to make an impression on the new coaches. Iman Marshall will certainly be at one of the starting spots, although he could play inside more in the new scheme, but there will be so many situations with three corners that it will be every bit the chance for Lockett and Langley to work as starters too.

Can the safety spots be the strength of the defense?

Certainly. You have a core group of four players who saw a lot of action last season in Chris Hawkins, John Plattenburg, Leon McQuay and Marvel Tell. That’s a nice mix of veterans and youth, with a lot of talent as well. Keep an eye on Tell, he had the coaches buzzing about his potential before an injury slowed him for a bit, and the guess here is that he really starts to assert himself this spring. You also have Ykili Ross, who brings good cover skills, and C.J. Pollard is available as an early enrollee.