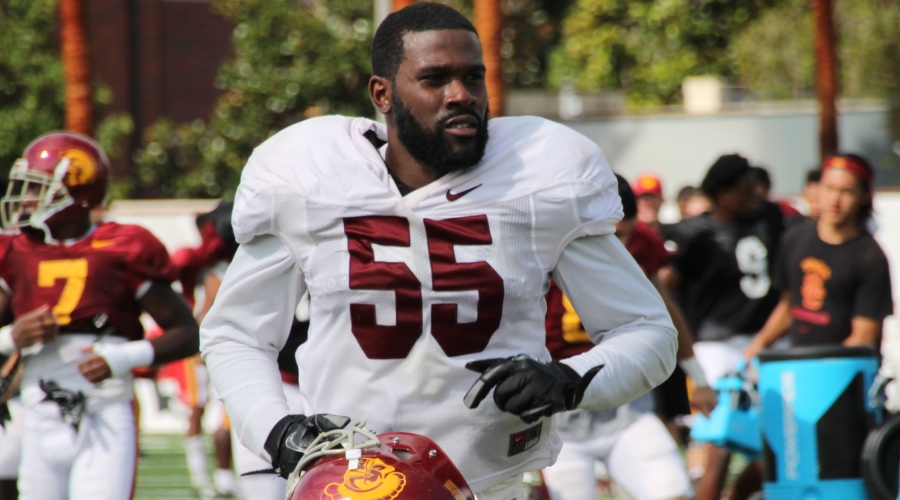 Here are some updates from USC practice this week as the Trojans prepare to face the Stanford Cardinal on Saturday at the Coliseum, along with a couple recruiting updates and the stat of the day.

* Lamar Dawson was able to return to practice this week after missing time since the middle of camp with a rib injury. Dawson worked with the 2nd unit in practice while Cameron Smith, who has started in his place and performed admirably as a true freshman, remained as the starter. Steve Sarkisian said that while Dawson hasn’t played a lot of football lately (he missed the 2014 season with injury) he is a heady player who has played a lot in his career, and he will be a good complement with Smith in the MLB rotation. Chances are Smith starts on Saturday but it wouldn’t be a surprise to see Dawson back in the starting role in the coming weeks.

* One player who might not be ready to go this week is Kevon Seymour, who “tweaked” his left knee last week against Idaho and was limited in practice. The absence of Seymour has resulted in Iman Marshall moving into the starting line-up and it’s somewhat ironic considering it was the Stanford game last year that true freshman Adoree’ Jackson really made his mark when he was put on Cardinal standout receiver Ty Montgomery, and did a very good job in coverage. It has long been predicted that a Jackson and Marshall pairing could signal a golden era for the USC cornerback spot, and we will likely get a long look at that duo on Saturday.

* Rasheem Green continued to work with the second unit this week at the defensive end spot behind Greg Townsend, Jr. That is notable for two reasons. The first is that Rasheem missed a good portion of camp, so that’s a quick entry into the rotation for a player who was on the sidelines just a few short weeks ago. Secondly, the presence of Green has allowed the coaches to move Claude Pelon to back-up Delvon Simmons. Pelon was expected to be a starter but Townsend performed well during the time in camp that Pelon was out with injury, and Greg has kept the spot even after Pelon returned.

* Sarkisian said that “so far” both Ykili Ross and John Houston are redshirting. Ross has been at safety, although he’s been banged up a little in recent weeks with a shoulder injury. Right now the Trojans can throw a 5-deep safety rotation out there with Chris Hawkins, John Plattenburg, Marvell Tell and Leon McQuay, plus walk-on Matt Lopes. Barring any changes, that should allow them to continue with plans to redshirt Ross. With Houston, there really isn’t a need to play him this year since he is at SLB behind Su’a, the one linebacker who is going to stay in as much as anybody, plus you also have Uchenna Nwosu and Quinton Powell available at that spot.

* USC wide receiver recruit Theo Howard and Westlake will be on the Prime Ticket game of the week Friday at 7:30 against Santa Margarita. Howard (a one-time Oregon commit) has been rumored to be leaning to the Bruins lately but he is going to wait before making a decision, and there is still legit mutual interest between him and the Trojans. On the Fox Sports PrepZone on-line games, USC defensive line verbal Keanu Saleapaga and La Mirada face San Clemente at 7pm, while Javon McKinley and Corona Centennial face Notre Dame at 7pm as well. Right now McKinley and USC appear to be looking in different directions but you never know what can happen with a player of his talent.

* One top verbal commit who will be on the USC sidelines Saturday is linebacker Mique Juarez, who has been putting up huge numbers as a quarterback so far this year. Juarez is being told by the USC coaches that he is being recruited to play the same position as Cravens, so chances are that Juarez will be watching closely to see how Su’a is used within the defense, and this is a game where Su’a can shine against the Cardinal run game.

Stat of the Day

USC is 1 of 7 FBS teams that have 0 turnovers. Since start of last season, Trojans have turned it over 12 times, fewest among FBS teams.