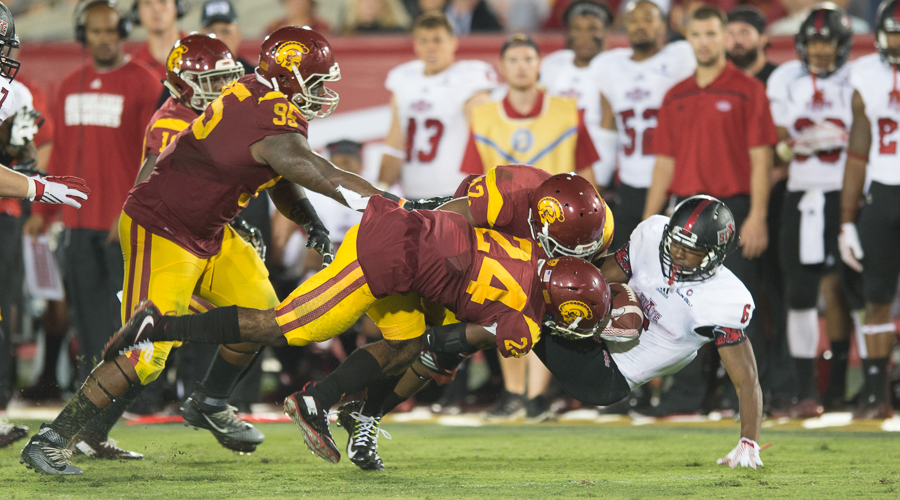 When reviewing this opening game against Arkansas State (A-State) the danger is to make too much or not enough about what went on last night in Los Angeles. From my perspective the A-State opening game was right-sized for this Trojan team right now. Overall this was a very good win with lots of positives and one that can be built upon. Here some of the highlights and noteworthy actions that I saw;

True freshman Cameron Smith started as MLB and led the team in tackles (SS Matt Lopes too with 7). This is excellent because 1) he is a talent that can move laterally well but tough inside the box and 2) the MLB really should lead or be in the top 2-3 players in tackles (if more than one player I add the tackles to measure effectiveness). Su’a…well there’s everybody else and then there is Su’a. He is just extraordinary and he plays the game with preparation, athleticism, enthusiasm and toughness. Offensive coordinators have to game plan him. Last year it was Su’a and Big Cat for now it’s just Su’a until another “man-among-boys” emerges. My favorite play was his playing off a WR’s block with just his left arm forcing the play back inside and then makes a video classic tackle on the ball carrier. Yup he’s that good. A shout out to the safeties too as Lopes, Hawkins, Plattenburg et al played well against an offense that is tough to read and to get proper alignment in the secondary. Our plus four turnovers (gross and net) is awesome with two leading to scores (Su’a interception and Osa Masina’s recovered fumbled lateral for six). The defense also showed good tackling technique and pursuit. I credit both to enthusiastic freshmen depth: 1) practices have been more real 2) we have more talented players who are having fun out there running around playing football. Btw, Townsend kept containment pretty darn well and I was impressed as last season that was just not the case.

As to the basics this defense was aligned in a 3-4 hybrid with a DE/OLB with a classic Cover 4 secondary with situational nickel package. Wilcox started off the game with more consistent gap pressure than most of last year. Maybe he made an adjustment tuned to our increased talent and numbers…time and more data will tell. Woods as NT was lined up over the center in a classic nose-to-nose alignment with A-gap assignment…pretty standard stuff but just fine. Townsend played mostly a 5-technique and Simmons a 3-technique. As a refresher 5-technique is generally lined up slightly outside shade of the OT or inside the TE and 3-technique is inside shade of OT or even outside shade of the OG. The responsibility for 5-technique includes C-gap and containment to his side and to pressure the QB; while 3-technique is tasked with B-gap on his side while taking on double teams or zone blocks while keeping outside arm free. Ok enough of the Defense 101 stuff…

I will say that Wilcox integrated his defense well to stop A-State which is a perimeter/off-tackle running team with a dangerous running QB who runs to any gap. We showed susceptibility off the A-gap which when I reviewed it was shared by both Woods and Temple. These were generally not quick hitters but QB reads with the handoff in the backfield but set up by other QB successful runs. It’s a tough offense to stop totally so the defense with +4 turnovers kept the points off the board even though we gave up 402 yards (net). For the data intensive reader our defensive 3rd/4th down effectiveness was 17 of 23 stops (74%) or from A-State’s perspective it was 6 of 23 converting 3rd/4th downs…nice. I’ll give Wilcox credit too for coaching up the D to avoid the tendency last season of silly untimely penalties. Let’s hope that keeps up.

Final notes: Shout outs to Chris Hawkins too who made a great transition from CB to Safety…all he did was make plays and end up with a pick and fumble recovery (nice hit by Ruffin), Freshman Iman Marshall is as good as advertised (6 tackles) and a difference maker. This team played 13 freshmen last night and overall 23 first time players which is fun and great to watch (challenging to get the numbers and names right!). Importantly this game is a good building block, guys had fun. While mistakes were made they can be corrected and no serious injuries.

Kevin Bruce played linebacker for the Trojans from 1972-75 and was a member of two national title teams. He is now a member of the Football Writers Association of America.