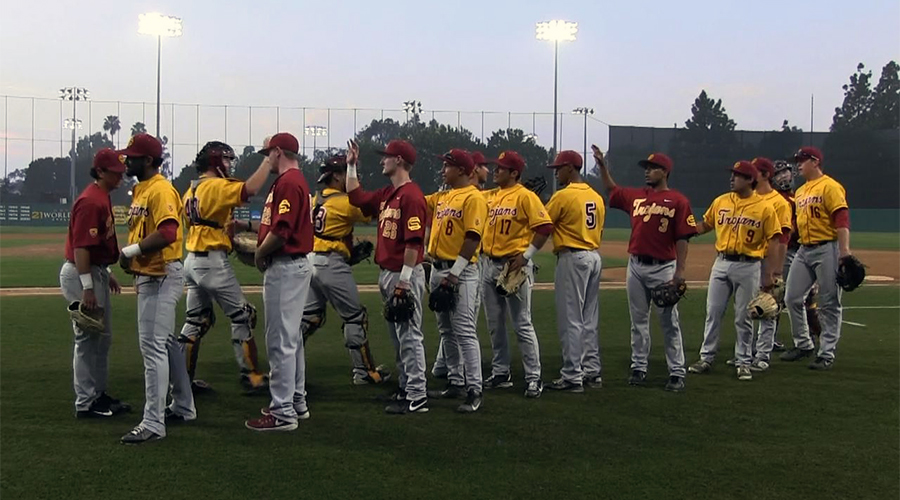 The week off and away from football practice sort of threw me off a little bit…we were going and then all of a sudden it stopped and we have to wait again. But now I’m all fired up to get it going again tomorrow.

One thing for sure, wherever I have been this winter people are talking about USC football again and about how excited THEY are. Not just in person (where they want to talk and talk and talk!) but on Twitter, Instagram , Facebook…every type of social media, too!

And thankfully, no transgressions during spring break time!

So I’ll have a good report from tomorrow’s practice for ya!

Football season must be coming—I just signed up for two more pre-season events at which to speak, and the high school schedules are out, too.

SC Spring sports are roaring! Baseball is 19-5, 2-1 in conference play with a home game with the Waves tomorrow, then 6 straight on the road in Pac-12 play at UW and U of A. This is, in the past many years, where the season has started to unravel. If we’re good—–really good—it won’t happen this time.

–While we are not a part of the NCAA men’s tournament (it’s coming) I did pick Ucla to lose to Duke in the Elite 8 (and yes picked them to upset Gonzaga after beating UAB. I thought they got the easiest draw I have ever seen and are also playing pretty well right now. Yes, they got lucky a little in the opener, but luck is part of the deal in the tournament. See James Forrest for Georgia Tech with .8 left. Aaargh.

–How come the women never got to a minor post-season tournament like the NIT or one of the others?

–Womens’s golf is top ranked, men are third. Women’s LAX is 6-2 and go to Dartmouth and Boston College this week. Might be tough back east, yes?

Women’s rowing vs ulca in Marina Del Rey April 11. I’ll be there!

Women’s swimming finished 8th in the NCAA’s, one of a handful to do at least that for several straight years.

Men’s tennis ranked 4th, might be better than that by the time the season ends. Women are 7th. Both play Ucla April 16, women here. Men’s volleyball is #7, Women’s water polo #3. Its great to be a Trojan.

The Kings ain’t gonna get in are they? The Clips are going to have home court in the first round. The Ducks are really good, but lately have seemed off. Dodgers are favored but I’m not convinced. I feel the same about the Angels. The Rams are coming, next year, and I hope they play at the Coliseum in 16 and 17.

Going to see Raul Malo and the Mavericks Wednesday in Hollywood. That man can SING!

Hope your brackets are doing okay and you’re having fun. See you tomorrow!