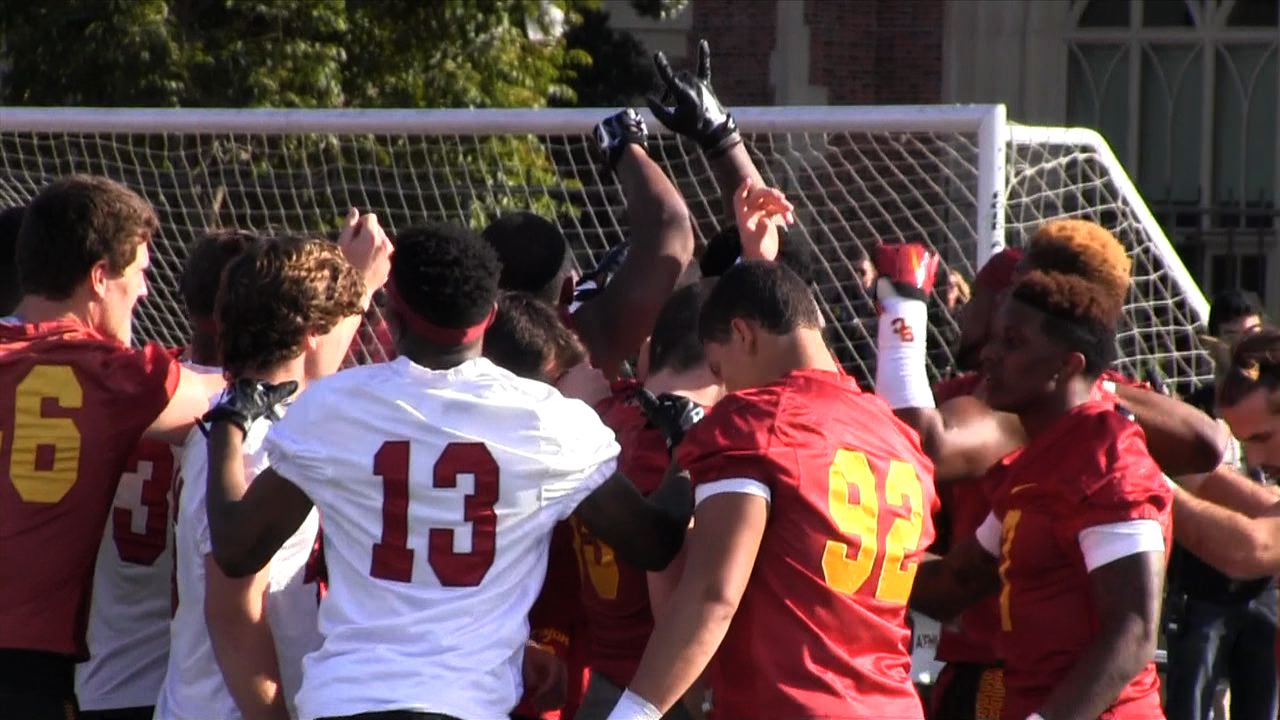 With Day 1 of spring practice in the books, here’s a look at how a potential depth chart for the Trojans just might look today.

* Those listed in italics were limited. Injured players who did not participate are not listed.

Not surprisingly, Kessler had a strong day as he continued to build chemistry with a wide receiver corps that lost Nelson Agholor and George Farmer following the 2014 season. Browne took the bulk of the snaps with the No. 2 offense and had a couple nice deep completions downfield, while Greene and Town also each took some reps.

Madden was limited as he continues to recover from his toe injury, so Davis had a busy day as the only scholarship tailback available. Toland also had plenty of carries, and Vainuku took reps back there as well. Pinner and Vainuku also made their presence felt as receivers coming out of the backfield.

Smith and Mitchell both shined on Day 1. Sarkisian said that Mitchell will spend Thursday on the outside after he lined up at flanker on Tuesday. Jackson, meanwhile, will take reps at flanker on Thursday after spending Tuesday exclusively on the defensive side of the ball.

Sophomore Bryce Dixon’s absence due to a student-conduct issue was one of the big stories of the day. Without him, the Trojans had just one scholarship tight end available in Cope-Fitzpatrick. Spears took a number of reps with the No. 1 offense as well.

With Wheeler (knee) out of action, the Trojans featured the same starting five that they ended the 2014 season with. Sarkisian noted the great shape that Mama came into camp in, while also praising the play of Falah. Rodgers took reps with the No. 2 offense at center. Freshmen Edoga and Hemsley also got some work in at tackle.

Antwaun Woods (pectoral muscle) was out, so Temple ran with the No. 1 defense at nose, where he was flanked by Simmons and Pelon. Defensive end Greg Townsend Jr. is another member of this unit who was sidelined. Dorton showed well with the No. 2 group on Tuesday, batting down two passes during 11-on-11 periods. Hill, who spent last season on the interior while running with the scout team, is now outside at rush end.

Anthony Sarao did not participate due to a foot injury, so the Trojans featured a starting duo inside of Michael Hutchings and Lamar Dawson. Dawson, who redshirted last season while recovering from a knee injury, played without a brace and drew praise from Sarkisian. Cravens remained at the SAM linebacker position that he lined up at for a majority of the 2014 campaign.

Hawkins spent the majority of the day at safety with the No. 2 defense, where he also lined up at during the bowl game practices last December. Jackson was just as sturdy in coverage as usual, while McQuay had a big sack during the session-ending two-minute drill.

Boermeester and Wood each took reps during a field goal period as they kicked off the competition to replace Andre Heidari as the team’s placekicker.