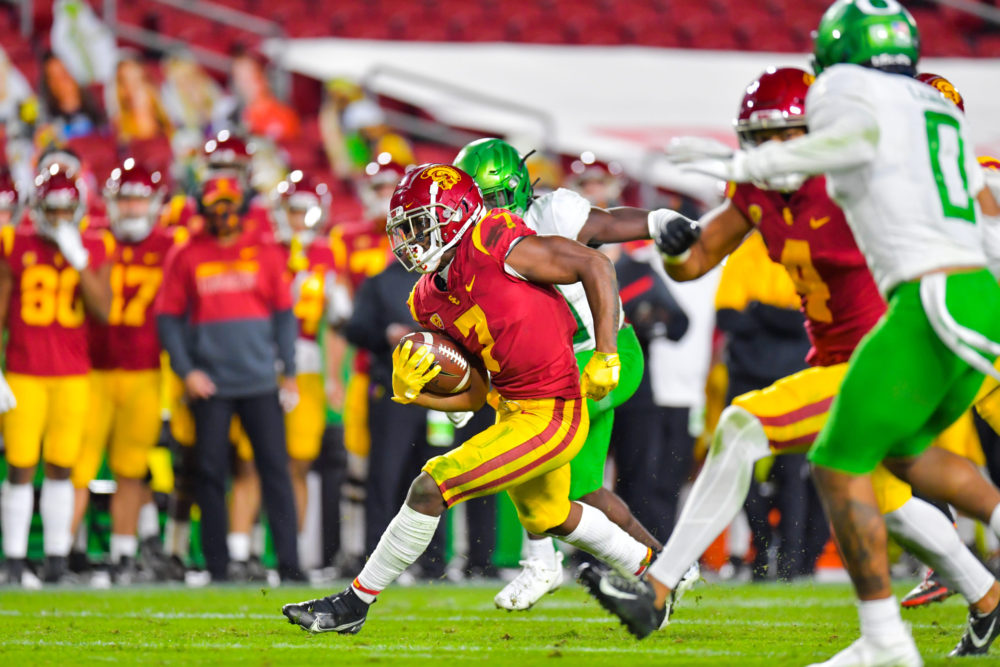 Our look at USC’s 2022 recruiting efforts shifts to running back, where the Trojans will absolutely be looking to sign at least one prospect in this class.

2022 running back commitments: none

There will likely be other running back targets added to this list, and some of these players listed are beyond longshots for USC at this time.

Running back is likely again one of the more important positions for USC in this 2022 recruiting class. The Trojans signed four-star prep back Brandon Campbell and brought in Texas transfer Keaontay Ingram in the 2021 class, but both Stephen Carr and Vavae Malepeai will exhaust their eligibility following this season, and Ingram is heading into his fourth year and could have an eye on the NFL Draft if he has an impressive season this fall. Even if he returns, USC would have just him, Campbell and Kenan Christon on the roster for the 2022 season, meaning USC could again be in the market for two backs in this recruiting class. Depending on how things shake out and who shows interest, taking another high school back and a more experienced transfer might make some sense again.

It didn’t appear that USC was truly in the running for four-star back Raleek Brown. The former Northern California standout is now at Mater Dei, but there was no local pull to USC for him and as of now, he’s headed to Oklahoma. It’ll be interested to see if the Trojans continue to recruit Brown, because he is a special talent as a five-star prospect and the nation’s No. 25 overall recruit.

He’s thicker than fellow local prospect Rayshon Luke, but both check in at 5-foot-7 and are dynamic with the ball in their hands. Luke might be the most likely running back addition for USC in this class if the Trojans pursue him heavily. He’s a four-star prospect and the nation’s No. 185 overall prospect and No. 1 all-purpose back.

The top target right now might be Jovantae Barnes. He is a bigger back, at 6-foot, 190 pounds, and he plays much bigger, with a strong build and powerful running style. He attends the same high school as USC 2021 wide receiver signee Michael Jackson III, so the Trojans are plenty familiar with him and he’ll likely get a push toward USC from Jackson. Barnes has plenty of major offers, including Alabama, Florida, Georgia, LSU, Michigan, Oklahoma, Oregon, Texas and many others.

While Brown is a five-star prospect, he’s not actually the top running back in the West region. That honor goes to five-star Gavin Sawchuk, who checks in as the No. 23 overall prospect and No. 2 running back nationally. Oklahoma was seen as the early leader for the 5-foot-11, 175-pound speedster, and it’ll be interesting to see how Brown’s commitment might affect Sawchuck, if at all. Michigan, Stanford and Washington are a few schools that have offered, and it appears as though USC will continue to pursue the talented back.

Texas continues to be a state hit hard by USC in recruiting, and running backs coach Mike Jinks will chase a couple prospects there yet again.

Four-star back Jadarian Price, the nation’s No. 195 overall prospect, put USC among his top eight schools in late December, along with Baylor, Minnesota, Ohio State, Oklahoma State, Stanford, TCU and Texas. The Longhorns could be the pick if Texas pushes hard for Price, though there could be other options higher on their board.

Jaylen Thompson could turn into another local option. USC offered the 5-foot-9, 180-pound back last summer. He’s shorter in stature but plays bigger than his size, and he’s dynamic out of the backfield as a pass catcher.

USC could be facing an uphill battle to sign an elite tailback or two in this class if the Trojans can’t show some improvement at the position in terms of both production and usage. But if the USC offense is clicking and a lead back or the position as a whole put up significant numbers as a runner and receiver, the Trojans should be in a good position to land at least one impact prospect at the position.