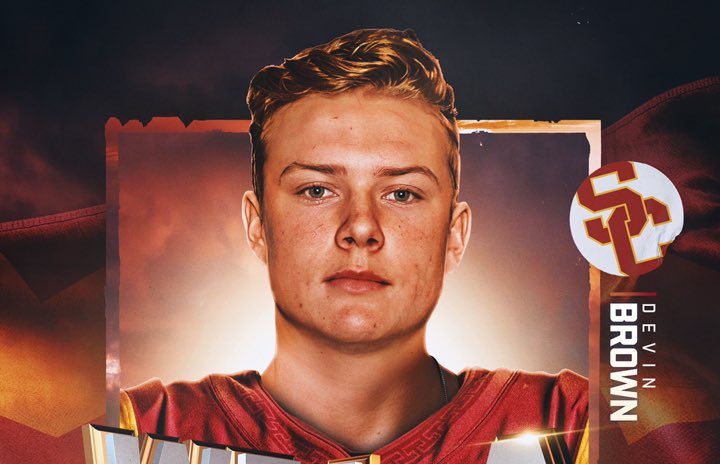 USC’s quarterback depth chart has been thinned out over the past year, but the Trojans added another future signal-caller to the mix on Saturday, when 2022 quarterback Devin Brown announced his commitment.

It was a quick path from offer to commitment for the Queen Creek (Ariz.) junior, as Brown received an offer from the Trojans on Sept. 1, but spoke earlier this month about how the Trojans had been recruiting him well before that.

Brown is a 6-foot-2, 190-pound quarterback with good athleticism. He was forced to sit out the first handful of games last season due to a transfer, but eventually earned the starting spot as a sophomore and threw for 1,319 yards and 10 touchdowns. The knock on him is the interception numbers last year, as he threw 12. But that represents the gunslinger mentality that can be corrected, and also makes him stand out to college coaches.

He was offered by both Arizona schools, as well as Iowa State, Michigan State, North Carolina State, Northwestern and Wisconsin. While he’s regarded as a three-star prospect, Harrell has earned the benefit of the doubt when it comes to quarterback evaluation, as he clearly saw what he had in Kedon Slovis from a very early stage.

Brown is another Arizona quarterback, like Slovis, and there is another interesting connection between the two quarterbacks. Slovis is tied to NFL Hall of Fame quarterback Kurt Warner, as Warner was Slovis’ offensive coordinator in high school. Brown will be tied to former Ohio State quarterback Joe Germaine, Brown’s high school head coach. And Germaine served as Warner’s backup for the Super Bowl winning 1999 St. Louis Rams.

When we spoke to Brown earlier this month, he raved about USC and was well-versed in its history at the position.

“If you’re a quarterback and you don’t know the history of USC, I don’t think you’re that detailed of a quarterback,” Brown said then. “I think every quarterback knows USC is a good place to go.”

Unable to go to camps over the summer or be evaluated by college coaches during the evaluation period, Brown put together a workout video of himself making various combine throws.

USC will look to take two quarterbacks in the 2021 class–Miller Moss (Mission Hills, Calif./Alemany) and Jake Garcia (Valdosta, Ga./Valdosta) are already committed. Slovis is likely to leave early for the NFL before Brown steps on campus, potentially leaving just Moss and Garcia, if both wind up enrolling at USC. It would make sense if USC looks for a second 2022 quarterback as well, or potentially a transfer addition, in order to get the position back to four scholarship players in the coming years.