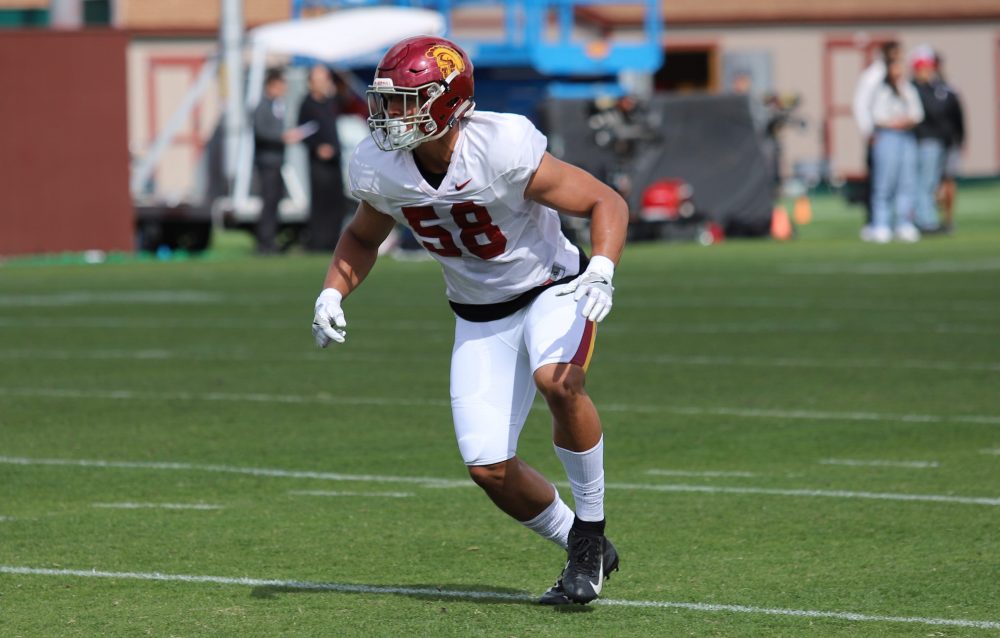 There are more than a few issues this program needs to iron out before Alabama comes calling to open the 2020 season, and while youth and injuries weren’t the only reasons USC finished the 2019 season 8-5 and with a thud in the Holiday Bowl, they can’t be outright dismissed when talking about this past year. And while the impact of those two things negatively affected the 2019 season, they have a chance to positively affect the 2020 season.

It’s unlikely any team in the country was forced to rely more on a third-string quarterback and fourth-string running back in big games the way USC was. USC probably wasn’t the only program that lost a senior defensive captain for the season, or started a game with three true freshmen in the secondary, or had just 11 pre-season starters combined on offense and defense play in all 13 games. But they might have been the only program to suffer all of those.

USC probably won’t be able to count on many 2020 signees making immediate impacts in the fall. A bulk of the Trojans’ recruiting class is made up of offensive and defensive linemen, where true freshmen starters are scarce. And the one elite addition thus far plays a position loaded with talent. But the Trojans should be able to turn to two of their problem areas last year—injuries and youth—to find substantial help already on the roster this coming fall.

At quarterback, three different players saw time for the second year in a row. And because of the injuries to JT Daniels, the Trojans are likely to have a fall camp quarterback battle for the fourth time in five years. Certainly, Kedon Slovis did more than enough to make USC fans comfortable with him taking snaps full time as a true sophomore in 2020, but both head coach Clay Helton and offensive coordinator Graham Harrell tabbed Daniels as the starter heading into this past fall. Whoever winds up starting, having both Slovis and Daniels working for that spot next fall—with an added year of experience—should boost production there.

Running back might have been the spot hurt most by injury and youth. Co-starters Vavae Malepeai and Stephen Carr missed extended time this season and it was clear that coaches weren’t comfortable turning Markese Stepp loose to start the season. True freshman Kenan Christon showed some flashes, but again, it was clear the coaches didn’t feel he was ready to carry the load by himself and were hesitant even to play him in more than the four games that would allow him to redshirt the season.

But because of all the shuffling in and out of the lineup, running back might be the most well-stocked position on the roster heading into the 2020 season. There will assuredly be a pecking order sorted out between now and Game 1, but the assumption is that it will be all hands on deck in this competition, rather than slow playing Christon to keep a redshirt year or easing Stepp into things as a redshirt freshman. It’s unlikely that all four will make it though the season without missing at least a little time, but it’s a good bet that the Trojans won’t lose three running backs for extended time in the same week again, as they did in 2019.

Most programs would be pretty happy with Tyler Vaughns, Amon-Ra St. Brown and Drake London returning at wide receiver (if Vaughns doesn’t declare for the NFL draft). For the Trojans in 2020, that will likely represent plenty of production, but far from the whole story at receiver. While London made a huge impact as a true freshman, fellow first-year receiver Munir McClain played well enough to see playing time before suffering a torn ACL and missing the second half of the season. His recovery timeline will dictate if he is able to make a contribution next season, but even if he isn’t, the Trojans have built-in replacements.

Kyle Ford might have been the most talented wide receiver USC signed in the 2019 class, but he was limited to just four games and one catch (a 20-yard touchdown against Oregon) as he recovered from a torn ACL. The Trojans should get a full season out of Ford, and potentially will add Bru McCoy to the mix. McCoy missed this past season after he signed with USC, transferred to Texas before spring ball, then transferred back to USC after spring ball. McCoy sat out the season for reasons never explicitly stated by Helton, but he began to return to practice during bowl prep and might be back in the mix for spring ball. If he and Ford are fully healthy for the fall, USC might be adding the two best and biggest additions to what is still (even without Michael Pittman) the best group of starters in the conference. And don’t forget John Jackson III, who played in 10 games last year and should be in the mix to see more time as a sophomore.

Talking about the tight end position will undoubtedly elicit some scoffs from USC fans, as the Trojan tight ends combined to catch just 15 passes in 2019. But USC will bring two extremely talented tight ends into the picture this year. Jude Wolfe played in just four games last fall as he suffered a back injury during spring ball and then was able to keep his redshirt year intact. Ethan Rae missed the entire season while recovering from an ACL injury. These are two potential impact players at tight end and both have the size and skill to contribute heavily this fall.

The offensive line is a tough spot to predict at this point, because of the impending decisions facing Austin Jackson and Alijah Vera-Tucker regarding the NFL draft. If they return, the offensive line could look very familiar, with those two manning the left side, Brett Neilon at center, and Liam Jimmons and Jalen McKenzie on the right side. This is one position where there isn’t a ton of help coming from inside the roster. Clearly, center Justin Dedich is ready to see more time, and that could come either at center or guard. With regard to injury, Andrew Vorhees’ return after missing all but two games last year should provide an experienced body ready to push to regain his spot at right guard. And as far as youth is concerned, Jason Rodriguez will be someone to watch this spring to see if he can get into the mix as a valuable reserve at guard or tackle after using a redshirt year last fall.

It wouldn’t be a huge surprise to see USC try to go back to the transfer portal this offseason. The Trojans landed Drew Richmond as a graduate transfer last year, so they can use that as a blueprint to seek out an upperclassman looking to make an impact in his final year. Ultimately, this needs to be a position we’re talking about next offseason as a spot where a bunch of young players took huge strides in practice throughout the 2020 season. With USC bringing in six offensive linemen in this class, it’s unlikely any will see significant time this season, but several could be called upon to play meaningful minutes in 2021.

Defensively, we’re going to start at linebacker, because that might be the position where the most unseen talent could be ready to make an impact in 2020. USC loses senior middle linebacker John Houston off last year’s roster, but has a ready-made replacement in Jordan Iosefa, who missed all of 2019 with a knee injury. Perhaps the biggest question mark on this side of the ball is Solomon Tuliaupupu, who has been forced to sit out his first two years at USC due to a foot injury. He participated in a handful of spring ball practices last year, but had to shut things down and eventually underwent another surgery on his foot. He’s one of the most talented players on the roster and will be a massive addition if he can be fully healthy this season. At various points this past fall, Iosefa, Tuliaupupu and Palaie Gaoteote were all sidelined and those might have been the three most talented linebackers on the roster.

USC will benefit from the maturation of Ralen Goforth (12 games played) and Maninoa Tufono (1 game played) as they move into their second seasons. And the Trojans should also get a full complement of outside linebackers, as Hunter Echols, Abdul-Malik McClain and Eli’jah Winston all missed time due to injury last season.

In the defensive backfield, 2019 served as an opportunity for just about anybody with a scholarship and a pulse to gain experience. The Trojans played at various times without all five starters—Talanoa Hufanga, Isaiah Pola-Mao, Olaijah Griffin, Isaac Taylor-Stuart and Greg Johnson—which meant true freshmen Chris Steele, Dorian Hewett, Max Williams, Briton Allen, Kaulana Makaula, Jayden Williams and Adonis Otey all saw time last season. Steele quickly became a co-starter at cornerback and Williams flashed enough before his injury to assume he will absolutely be a factor this season no matter what scheme USC’s new defensive coordinator employs.

Up front, keeping Jay Tufele and Marlon Tuipulotu for at least one more year would be crucial, as the Trojans don’t have the depth to replace either of them for 2020. This spring will be vital for backups along the interior of the line, as De’jon Benton showed flashes during his true freshman season, and Stanley Ta’ufo’ou continues his shift from linebacker to defensive tackle. Just as Jason Rodriguez will be someone to watch along the offensive line, Trevor Trout could be that player along the defensive line. Trout suffered a biceps injury last spring and appeared in only two games last fall. If he can provide some serviceable minutes this season, it could help take some of the pressure off of Tufele, Tuipulotu and Brandon Pili having to play every snap between them. And the defensive line could get a boost with the return of Jacob Lichtenstein, who started twice and played in 11 games in 2018, but missed the entire 2019 season due to calf injuries.