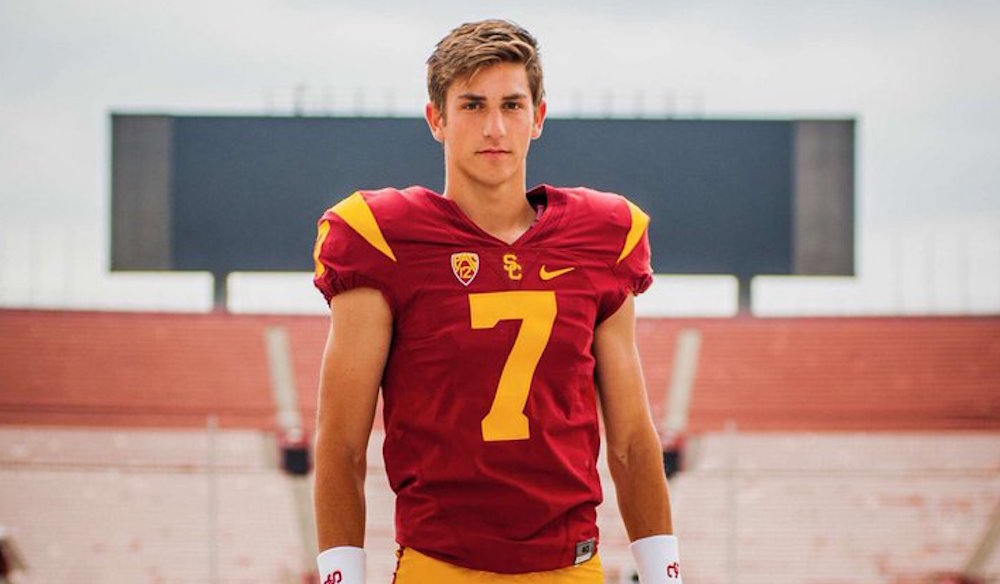 With fall camp set to start, we take a look at how the current roster is affecting positional needs in the 2019 class on the offensive side of the ball.

How we got here: There is an old adage in college football recruiting that you want to take a quarterback in every class, and another adage is that you always want to have at least four quarterbacks on your roster at any one time. With that in mind, the Trojans enter this year with only three scholarship quarterbacks so not only do they want to take one in this class but they have told QB prospects that they plan to take two.

It’s not the first time in recent years that USC has gone into a season with only three scholarship QB’s on the roster. In 2016 there was Max Browne, Sam Darnold and Matt Fink after Jalen Greene had been moved back to wide receiver full-time. Last year there was Darnold, Fink and Jack Sears after Browne had left for Pittsburgh as a grad transfer. For the upcoming season, the departure of Darnold to the NFL—with two years of eligibility remaining—has created another situation where the depth chart is worth watching. There was the option in the off-season of bringing in a grad transfer—the tires were kicked on names such as Shea Patterson, Wilton Speight and Blake Barnett—but no moves were made. That could make things interesting in the event of an injury, or if JT Daniels wins the job and either Fink or Sears decides to transfer.

Quarterback targets: Slovis is already committed, while Jayden Daniels and Ryan Hilinski are local quarterbacks with offers. Hilinski is committed to South Carolina and could be a difficult flip. Daniels is looking at Oregon, UCLA and Utah, among others. It wouldn’t be surprising to see USC coaches head into the season with a few targets in mind and extend another few offers at the position during the fall.

How we got here: It was an expected blow to the 2018 roster when Ronald Jones elected to declare early for the NFL Draft and USC coaches have done well to stock the position with talent heading into this season. Ware was almost an afterthought when he signed along with Jones in the 2015 class, but he looks ready to provide a significant contribution this year. Malepeai was a late steal from the Oregon recruiting class, and an important one at that, as it looked as though USC would be shut out on the running back front in the 2016 class. Carr was the arguably the most important USC target in the 2017 class and, if healthy, should have a monster season. Stepp was an important addition in the most recent class, as USC was able to land a talented big back during a seriously down year for local running backs.

Running back commitments: None

Running back targets: Kenan Christon, Jordan Wilmore and Giles Jackson appear to be at the top of the list for USC at this point in the cycle. It raised a few eyebrows when the Trojans elected not to seriously chase in-state standouts Austin Jones, Zach Charbonnet and especially Sean Dollars, who are committed to Stanford, Michigan and Oregon, respectively. But if USC can reel in two, or potentially all three, of their remaining targets, it will be a very successful year at the position.

How we got here: The 2015 group of wide receivers that could be seniors this year consisted of two junior college transfers and Deontay Burnett, who elected to leave with one year of eligibility remaining. In 2016, California was loaded at the wide receiver position and the Trojans needed to load up. Vaughns and Pittman were no-brainers and have proven that during the past two seasons. Imatorbhebhe, Jones, Sidney and Young all have opportunities to step up this year. That massive class allowed the Trojans to recruit the position lightly in 2017 and 2018, but there are some potential difference-makers there in Grimes, Williams and especially St. Brown, who should see plenty of the field as a true freshman. The dismissal of Joseph Lewis, one of the nation’s top receivers in the 2017 class, leaves a hole that should be plugged by a big group of 2019 receivers.

Projected commitments for this class: 5

Wide receiver targets: USC will go all in on Kyle Ford and Bru McCoy as the final two additions to the wide receiver class. Five might seem like a big number at this position, but there’s a good chance that wide receiver room could open up a bit after this season, as Pittman is a candidate to leave early, while some of the other wideouts could look elsewhere for opportunities if they don’t take that next step this fall. Adding Ford and McCoy would make this both a tremendously talented and imposing group, with Nacua the smallest at 6-foot-2, 190 pounds.

How we got here: Petite sure looked locked into his Duke commitment until a mid-December flip to USC. Likewise, Imatorbhebhe looked as though he would never don the cardinal and gold until he transferred from Florida following his freshman season. The position suffered a hit when 2016 signee Cary Angeline elected to transfer, which made grabbing two commitments in the 2017 class a priority. USC did just that, adding Falo late in the process.

Tight end targets: Jude Wolfe will likely become the second tight end commitment for USC when he announces his commitment on August 3. Southern California is home to some good tight ends in this class, and Rae and Wolfe might be the two best. Losing Petite following the season and potentially losing Imatorbhebhe as well, the 2018 signees could have an opportunity to play as true freshmen.

How we got here: Roy Hemsley, Cole Smith, E.J. Price and Nathan Smith have all been lost from the roster due to injury or transfer, leaving the stellar 2017 group to fill in a number of gaps, with Vorhees and Jackson as potential starters and McKenzie, Neilon and Vera-Tucker looking like valuable reserves this season. Now, USC heads into the 2018 season with some seasoned veteran starters, but very little tested depth behind them.

Projected commitments for this class: 5

Offensive line targets: At this point, Quinones is projecting at offensive guard, though he could wind up on the defensive line as well. Rodriguez joins Jonah Tauanu’u and Sean Rhyan as the three local must-haves along the offensive line. Enokk Vimahi and Troy Fautanu remain in the mix, as do Darnell Wright and Stacey Wilkins, though as significant longshots.