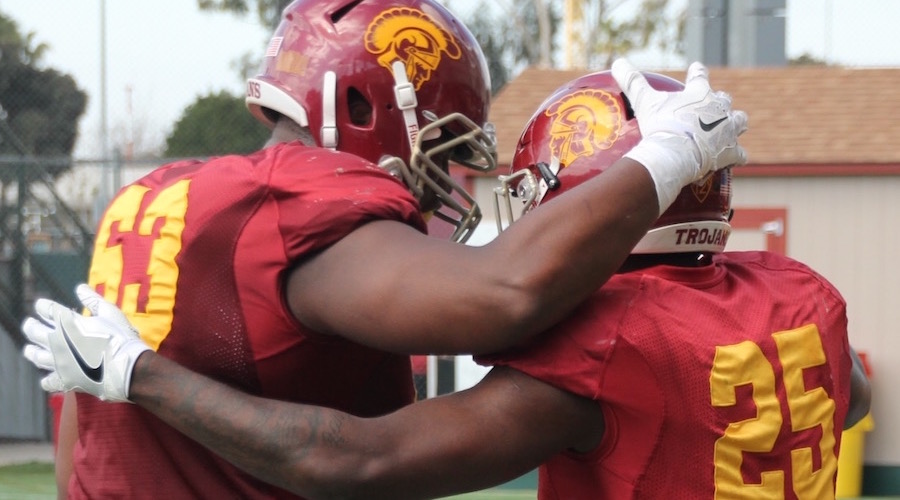 Now that USC football has concluded spring drills here is a review of what happened over 15 practices on Brian Kennedy-Howard Jones Field.

I’m going to start off with Sam Darnold at the top of the list. There’s no question when watching the Trojans in action that Darnold is in command of his game right now and that means there’s no need to worry about a few interceptions as the offense settles in around him. It’s a good place to start when your quarterback is the best player on your team, and possibly the best in the country. On defense I’m going to give a nod to a pair of players on the line in Rasheem Green and Uchenna Nwosu. Rasheem is simply growing into a physically imposing presence and his game is developing nicely under Kenechi Udeze as well, it looks like he’s ready to take his place in line as the next big-time Trojan interior defensive lineman. Nwosu has seen an impressive career arc to get to this point where he is one of the undisputed leaders of the USC defense.

Wide receiver, specifically the two outside receiver spots vacated by JuJu Smith-Schuster and Darreus Rogers. It was an important enough hole that Clay Helton remarked in spring that the offense would go as far as the young receivers went, and if that’s the case then the offense should be just fine considering that Michael Pittman and Tyler Vaughns were two of the most consistently productive players on the field. You can see the size in Pittman but what will surprise you is his speed, while Vaughns is just so smooth and catches everything thrown his way.

Nose tackle, and that’s saying something considering the void left by Stevie Tu’ikolovatu. I’m not saying the combination of players the Trojans have at the position will be the run plugging force that Stevie T was, but the duo of senior Josh Fatu and early enrollee freshman Marlon Tuipulotu showed that they can be solid at the point of attack as well (and that doesn’t even include the potential addition of Kenny Bigelow in the fall). Fatu gained a lot of experience last season as a junior college transfer and any transition adjustment is in the past, he’s ready to play a major role. Tuipulotu on the other hand is just getting started with one of the more impressive immediate showings I can remember from an incoming defensive lineman. Marlon is big, strong, agile and fundamentally sound, all that he was reported to be.

Offensive player who raised his game the most

A real solid case can be made for Matt Fink. There were certainly others who helped themselves but it would be hard to find someone who did it more. Let’s face it, there were plenty of Trojan fans out there who figured it was basically a matter of time before early enrollee Jack Sears was in place as the back-up to Darnold, but Fink went out in spring and showed a good presence on the field, an increasingly strong arm and the always strong running ability. On top of that he’s adding bulk and is going to be a real nice-sized guy in a short amount of time. I’m not saying the #2 QB competition is over yet, it will certainly continue into the fall, but so far Fink has earned the right to enter fall camp in that spot.

Defensive player who raised his game the most

I’m going to say Isaiah Langley. I think the door was pretty wide open for Jackie Jones to slide into the starting corner spot vacated by Adoree’ Jackson but the improved play from Langley through the majority of spring made it more of a competition than expected. Langley had a promising freshman year in a limited role but then dropped off last year while also serving a suspension for an off-field issue, so it was unclear where he was headed in terms of being a legitimate factor in the rotation. He came out strong in spring and was doing a lot of alternating with Jones with the 1’s, but unfortunately a harsh reality hit when Isaiah’s mother passed away a few weeks ago and it (understandably) took the wind out of his sails toward the end of spring. We send our best wishes to Isaiah and the Langley family.

Biggest concern coming out of spring

I don’t think there’s any question it’s the unsettled nature of the offensive line. What was already a line that had to replace three starters was faced with the reality at one point in spring of having all three experienced returning starters out with injury. That meant a lot of reps for guys who wouldn’t normally get them, and some looks at players in different spots. Those things can sometimes be good in the long run but what will be even better is when Toa Lobendahn, Viane Talamaivao and Nico Falah are all healthy and ready to take their spots back in the starting line-up. They will join Chuma Edoga, the likely left tackle, and then either Chris Brown or Roy Hemsley in the final starting spot.

Tight end isn’t a position that gets a lot of attention, and there’s nothing flashy about Cary Angeline’s game so the redshirt freshman didn’t get a lot of hype, but he certainly looks like someone who can be a real factor. I think the depth at tight end is very good with Daniel Imatorbhebhe as the projected starter and Tyler Petite expected to be the #2 but Angeline could easily be in that role as well. The Trojans will use plenty of multiple TE sets so there should enough opportunities to go around, especially with a quarterback like Darnold who knows how to use the tight end.

I’ve always been a big Vavae Malepeai fan ever since first seeing him in action at The Opening regional prior to his senior year in high school. He reminded me of one of my favorite Trojan hybrid running back/fullbacks, Malaefou MacKenzie, and I was thrilled when he flipped from Oregon on signing day last year. What I didn’t expect to see so quickly was a 215-pound power back who shows patience in waiting for a play to develop and the speed to make something happen if the play breaks down. Helton used Vavae in some two-back sets in spring, almost in a fullback role, but yet it’s clear that he is a ball-handler, someone who can catch too.

Oluwole Betiku is getting close to being the pass-rush specialist the Trojans are hoping he can be, a sheer combination of size and explosiveness that would be a welcome addition to this year’s defense. There were flashes in spring of what he can be, including back-to-back sacks in a Coliseum scrimmage, but they weren’t consistent enough to rise to the level of him being that kind of dependable option just yet. Wole is going to get to that place soon, and what a bonus it would be for Clancy to have that kind of weapon available to him this year.