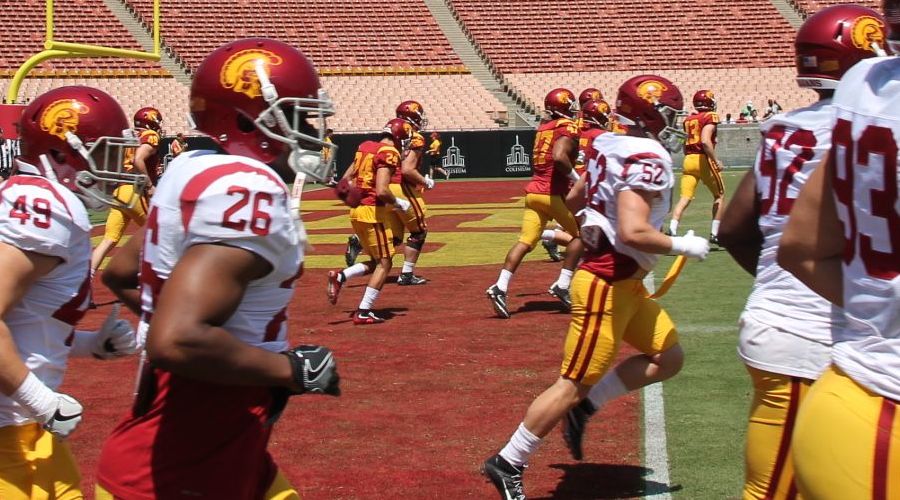 The USC football team concluded the 2017 spring ball sessions with a 62-play practice at the Coliseum that gave the fans a look at the present, past and future of Trojan football.

There were various scrimmage situations involved in the day, including a pretty 20-yard touchdown reception by Tyler Vaughns from Matt Fink, a six-yard TD run from Reuben Peters and a 50-yard field goal from Michael Brown, as coach Clay Helton elected not to conduct a full scrimmage due to injury-depleted depth at certain positions.

The depth charts for offense and defense were as follows:

The team came on the field just before noon on a warm southern California day for some warm-ups and early position group work. Next came some punt drills and special teams work before the team headed back into the locker room and then coming back out for more of a proper game day entrance.

The first drill stations saw the team split, with the skill players at the 50-yard line taking part in a 7-on-7 session while the linemen were in the northwest corner of the end zone working on pass rush drills.

At the first break, the men’s basketball team came on the field to be honored for a school-record 26 win season. Traveler also made the first appearance of the day out of the tunnel.

Next came the situation drills with a full 11 on 11 contingent, and a focus primarily on the run game. It was hard to judge things without live contact but one back who stood out was 215-pound redshirt freshman Vavae Malepeai with his ability to create when there wasn’t much of a hole there. I’ve heard Vavae described as “sneaky quick” and the more I see him the more I think that is accurate.

The next group introduced was the seniors (and early draft entrants) from the 2017 Rose Bowl champions who received their bowl rings. In attendance were: Zach Banner, Justin Davis, Joel Foy, Adoree’ Jackson, De’Quan Hampton, Leon McQay, Quinton Powell, Damien Mama, Darreus Rogers, Michael Hutchings, Jordan Simmons, Zach Smith, JuJu Smith-Schuster, Stevie Tu’ikolovatu, Chad Wheeler and Isaac Whitney. The players were facing the south stands with the fans in attendance so they were right in front of the defensive players bench, and my favorite part of watching the ceremony was to see how fired up the current players were for the seniors to get their rings, you had guys jumping up and down, it was a cool celebration to see.

After that the ball was placed inside the offense’s own 5-yard line at the peristyle end, in what Helton refers to as a “backed-up” drill. Sam Darnold got things going with a completion to Vaughns. Chris Hawkins broke up a pass intended for Jalen Greene. Darnold hit Velus Jones on the sideline. Jack Sears completed a pass calmly out of the end zone to Michael Pittman, and then did a very nice job on the next play to slide after a gain on a scramble.

The field was flipped with the ball placed at the 50 and heading from west to east. There was a bit of trickery right away from Jalen Geene on a double pass deep but Vaughns couldn’t come up with the catch in the end zone. Sears hit fellow San Clemente grad Jake Russell. Velus Jones, who gained a lot of attention early in spring for his speed, went 34 yards on a reverse.

The members of the recruiting class of 2107 were brought onto the field and introduced to the crowd. It’s the first time I can recall an incoming class being introduced at a spring game and it was a very nice touch, hope that can continue.

When the action got started again the first play was a touchdown pass from Matt Fink to Tyler Vaughns, a nice hook-up for a pair of redshirts who have really shown well this spring. Jalen Jones prevented another touchdown with good position in end zone to knock away a ball intended for Josh Imatorbhebhe. Reuben Peters punched in a short touchdown run. There was a big cheer from the crowd when Michael Brown made a 50-yard field goal, but there might have been a bigger cheer when Jake Olson came in to make the final long snap of the day, on a 33-yard FG from Brown that was good.