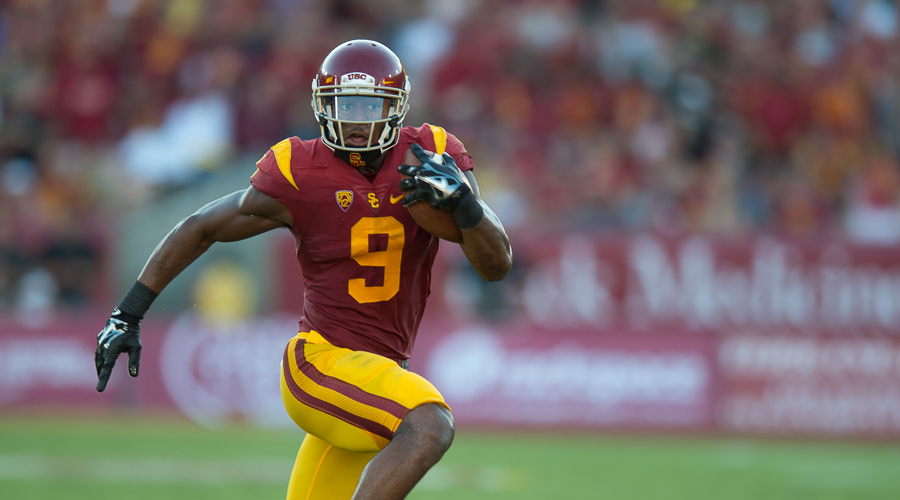 It’s the first spring ball under new Trojan head coach Clay Helton and a chance to see the foundation he wants to put in place for his program. Helton has stated that the top priority this off-season is to develop a physicality in the trenches, which is music to the ears of USC fans who want to see a return to that power brand of football.

There will be plenty of opportunity to hit the ground running on offense as Helton has put together a staff that he is very familiar with, and he has 10 of 11 starting spots returning on that side of the ball.

Helton, who has made it clear that he wants to manage the team rather than focus on either offense or defense, has named Tee Martin as his offense coordinator, and the two have worked together for several years at USC. For his QB coach, Helton turned to his younger brother, Tyson, who has established a good reputation of his own in the coaching circles, and for the offensive line he turned to an old family friend in Neil Callaway, who has coached with Helton’s dad, Kim, and with Tyson. Callaway is also a former head coach at UAB, spent time as a line coach at multiple SEC schools and played at Alabama under Bear Bryant. The running back coach spot will be filled by Tommie Robinson, who coached there in 2013 for the Trojans, while tight ends will be coached by John Baxter, who worked with Helton at USC previously while also handling special teams.

The marquee position battle of spring for the Trojans. Max Browne is the former top-ranked HS quarterback who has waited his turn for three years and is as prepared as you could want him to be. His strengths are his football intelligence, decision making and deep ball. Sam Darnold brings a lot of physical potential, and his ability to run with the football is a trait that offers a different dimension than Browne. These two figure to get the majority of reps with Helton saying he wants to name a starter by the end of spring but he will extend into fall if needed. Jalen Greene will also get a look after spending last year at receiver, and early enrollee Matt Fink is available as well.

Sleeper: Greene – don’t be at all surprised if these coaches figure out a way to take advantage of Greene’s versatile skills as someone who can pass, run and catch.

Justin Davis and Ronald Jones could be one of the more talented tailback duos in the nation and they should be the driving force behind the Trojan run game. Davis is a smooth senior who runs hard while Jones brings the excitement as a back who was good enough to break the USC freshman rushing mark set by Charles White. Aca’Cedric Ware and Dominic Davis will compete for playing them in the rotation. There is not a true fullback on the roster, so we will see the use of hybrid tight ends.

Sleeper: D. Davis – a very good pass catcher out of the backfield with tremendous speed

This unit could be the deepest on the team, with a genuine star in JuJu Smith-Schuster leading the way. Smith-Schuster is the real deal on and off the field, and his physical presence should definitely help set the tone for the offense. Darreus Rogers is a senior who will be looking to lock down a starting spot, while Steven Mitchell is the likely slot receiver. Both players are still looking to take that proverbial next step because there will be a lot of receivers trying to take their spots. Isaac Whitney was improving last year before his injury, De’Quan Hampton offers a big receiver option, Deontay Burnett showed a lot of promise as a freshman, while Ajene Harris returns in the slot after missing last year due to injury. Adoree’ Jackson is not expected to be available, due to track. Josh Imatorbhebhe and Michael Pittman are early enrollee freshmen with size and athleticism.

There is stability at tight end this spring after the upheaval last season with losing the top two players on the depth chart. Both Taylor McNamara and Tyler Petite return after being the primary duo throughout the 2015 season and performing at a nice level. Petite could be one to watch this spring to see how he adds bulk and how he is used as a pass catching option, he’s got a lot of skills in that area. Daniel Imatorbhebhe (brother of Josh) is also available after sitting out last fall as a transfer from Florida.

Sleeper: Imatorbhebhe – don’t be surprised if he gets look at a hybrid h-back role that includes duties similar to a fullback. Think the way the Trojans used Rhett Ellison.

The line couldn’t be set up much better for Helton to install the physical identity in the trenches. There is plenty of veteran talent returning to the point where the Trojans are considered to have one of the best pre-season lines in the country, and it’s hard to argue with that. But it’s also hard to argue that there is work to be done to get to that point, and Callaway is going to be a big key because there are many who think a sage veteran with physical football roots is just what the line needs. He will certainly have enough players at his disposal. There are a pair of returning starters at tackle in Zach Banner and Chad Wheeler with a third option in Chuma Edoga who saw a lot of time as a true freshman. Both guards return with Damien Mama and Viane Talamaivao plus Chris Brown and Nico Falah, both of whom played well in limited action last year. Toa Lobendahn, the projected starter at center, is not likely to be available due to knee surgery rehab so Khaliel Rodgers will be there for spring after starting multiple games last fall, and Cole Smith is available after redshirting. That’s a pretty solid two-deep, and there will be a lot of eyes on the line in spring to watch how they develop.

Sleeper: Edoga – Banner and Wheeler are multi-year starters as seniors, but Edoga will make a strong case for a starting spot

While there is a lot of experienced pieces on offense, the exact opposite is true for the defense. All four defenses coaches are different from last year, although there is a lot of familiarity with much of the group. Clancy Pendergast returns as defensive coordinator after leading the Trojans to the top-ranked defense in the conference in 2013. Kenechi Udeze was the assistant strength coach for one year before serving a one-game apprentice coaching the D-line in the Holiday Bowl, and it was enough to get the former All-American the job. Johnny Nansen (LB) was the USC running backs coach for the past two seasons and has plenty of defensive coaching experience on his resume as well. Ronnie Bradford (DB) is the lone newcomer without any USC ties but he did coach with Pendergast so there is familiarity between those two.

It will be a brand new threesome starting at the tackle spots for the Trojans, but the good news is that the coaches did a nice job last season of getting the younger guys some extended reps so they are fairly prepared for the opportunity ahead of them. Rasheem Green ended last season with as much momentum as anybody here, punctuated by his fumble return for a touchdown against UCLA. Noah Jefferson and Jacob Daniel also showed enough as true freshman to think that they will be ready for more, and then there is Kenny Bigelow. These four figure to lead the way in the interior, and it would be a huge bonus if Bigelow is full healthy from his knee injury and ready to deliver on his substantial potential. Malik Dorton could get in the mix as well, and we will find out where Kevin Scott is at after redshirting last fall. Liam Jimmons is an early enrollee.

Sleeper: Jefferson – he moves so well for his size, and he brings a lot in that department.

Scott Felix returns as one defensive end starter but his status for 2016 is unclear due to personal issues and there will be plenty of challengers for playing time in spring. Porter Gustin figures to be push for a starting spot with Don Hill, Jabari Ruffin, Osa Masina, John Houston, Christian Rector and early enrollee Oluwole Betiku also available.

Sleeper: Masina – could pair with Gustin as an athletic duo coming off the edge

The top returner in the middle will not be available in spring as Cameron Smith rehabs from a knee injury. Olajuwon Tucker filled in well for Smith at the end of the year and should be at one of the starting spots to open spring. Other candidates include Michael Hutchings, Uchenna Nwosu and Quinton Powell. Walk-ons Joel Foy, Reuben Peters and Grant Moore could get extended reps.

Sleeper: Nwosu – he’s shown flashes of potential and could be ready for more.

Iman Marshall returns at one starting cornerback spot but Adoree’ Jackson is not expected to be available for spring drills as he will focus on track & field with a potential shot at the Olympics. That means opportunity for extended reps for Isaiah Langley and Jonathan Lockett in front of a new position coach and coordinator. There are more available bodies at safety even with Chris Hawkins sitting out due to recent ankle surgery. John Plattenburg, Marvell Tell and Leon McQuay all bring experience to the table with Tell creating a lot of buzz at the end of last season. Ykili Ross impressed on the service team as a redshirt last fall, Matt Lopes is an experienced walk-on, and USC legacy defensive back C.J. Pollard arrives as an early entry freshman.

Sleeper: Langley – he’s athletic with long arms and good fundamentals for the position. As mentioned above, he’s also going to get a lot of work this spring.

John Baxter isn’t the only new face on the Trojan special teams, as there will be a new placekicker (Matt Boermeester) and punter (Chris Tilbey) this spring. We should also see a lot of work on ST coverage and blocking drills if past history under Baxter is any indication.