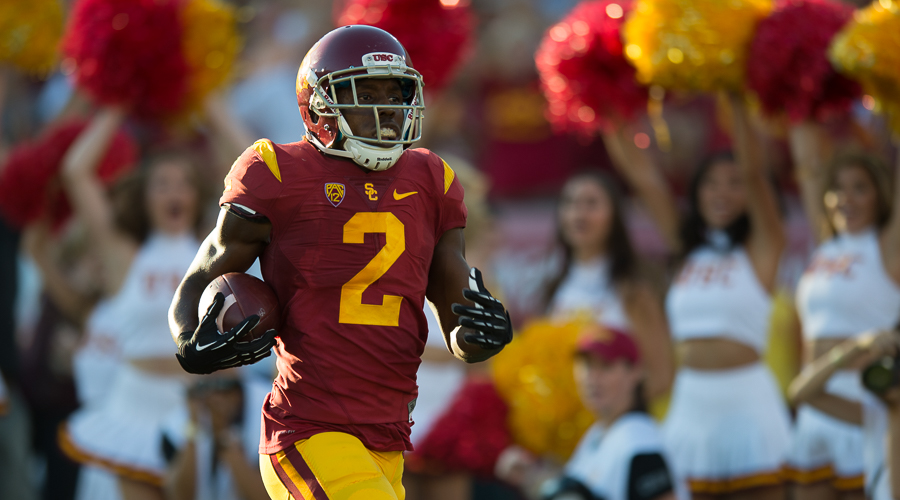 LOS ANGELES–USC sophomore cornerback-wide receiver-returner Adoree’ Jackson was named the Most Valuable Player of the 2015 Pac-12 South Division champion and Holiday Bowl-bound Trojan football team at the annual awards banquet Sunday (Dec. 13) at USC’s Tutor Campus Center Ballroom.
Jackson, an All-Pac-12 first teamer in 2015 and a finalist for the Hornung Award as the nation’s most versatile player, had 31 tackles and an interception for a TD on defense, 24 receptions with 2 touchdowns on offense and 23 punt returns for a 10.9 average with 2 TDs and 29 kickoff returns for a 22.9 average on special teams.

Senior center Max Tuerk, who suffered a season-ending knee injury in the middle of the 2015 season, was named USC’s Most Inspirational Player. Junior offensive tackle Zach Banner was USC’s Offensive Lineman of the Year, senior defensive tackles Antwaun Woods and Delvon Simmons were the Defensive Linemen of the Year, sophomore wide receiver JuJu Smith-Schuster was the Offensive Perimeter Player of the Year, junior outside linebacker Su’a Cravens repeated as the Defensive Perimeter Player of the Year and senior fullback Soma Vainuku was the Special Teams Player of the Year. Senior quarterback Cody Kessler won the Trojan Way Leadership Award for the second consecutive year.