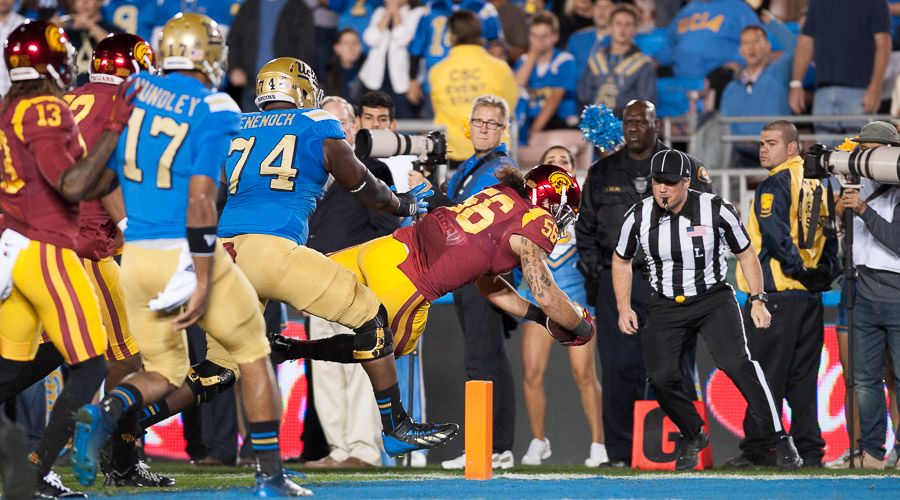 Let’s back up a second, Coach. Saturday night, the Trojans looked exactly that in a 38-20 defeat – dead, lifeless, but more important, void of any emotion that should accompany a team into its annual rivalry contest. On a night when USC finally earned its spot on the primetime, national stage to assert its true, underrated talent, the Men of Troy lost more than a football game. It lost a city, a fan base, and a heartbeat.

As I fought the proverbial Los Angeles traffic en-route to Saturday’s 84th edition of the USC-UCLA classic, I began to ponder: how do you measure a rivalry? I glared at the passing cars in the lanes next to me, equipped with fluttering Trojan flags on windows and Bruin bumper stickers galore, and could arrive at only one answer: pride. There’s a magic in the air when tailgating before rivalry games, and a pride that comes in attending. There is a temper meant to be flared during pregame, and a swagger meant to accompany teams out of their respective tunnels. There is a fire to be ignited inside locker rooms, and an emotion that should resonate with players from the opening kick to the last knee.

But Saturday, in the most unanticipated of fashions, Sarkisian’s Trojans only made me contemplate the following. Where was that magic? Where was that pride? Where was that temper? Where was that swagger? Where was the fire? Where was the emotion? Where was the heart? You could argue that when Senior linebacker Hayes Pullard led the swaying Trojans out of the tunnel the swagger had entered the building. It could be said that when Anthony Sarao plucked a Brett Hundley pass out of the air for six points a fire was lit. Aside from those two impactful – yet brief – moments on Saturday night, it was abundantly evident that Jim Mora’s Bruins arrived with these very qualities meant to go out and win rivalry games in a resounding method.

Quite simple, yet so complex to still fathom, is the answer to all the Trojan head shakes and sighs from a signature win for Westwood: UCLA wanted it more. With Pac-12 Championship implications on the line for both teams, the Bruins went out and seized the moment, the one thing Trojan fans have begged the play call – on both offense and defense – to exactly execute. In the darkness of a chilly November evening in Pasadena, the only thing that shined brighter than the UCLA offense was the luster of USC’s chrome helmets, it seemed.

The USC coaching staff will tell all of the assuring lines we want to hear in post-game interviews: that the team needs to offer better pass protection, make the right reads, eliminate foolish penalties, and call the game in an attempt to win, not to “not lose.” While that might be the case and truth of the matter on the field, my heartbreak, and my head shake and sigh came with 12:39 left in the ballgame, when the Trojans trailed by a count of 38-14. During a TV-timeout, nearly all Trojan fans in attendance vacated the stadium, called the game as in the bag for the Bruins, and turned its back on any hope of a comeback in the final quarter of play. (Hey, stranger things have happened).

But what ensued epitomized my experience at the Rose Bowl. Nearly all of the seventy or so thousand Bruins – I kid you not – waved in unison to the plethora of Trojan fans exiting the college football cathedral that is the Rose Bowl, which was quite the statement. In that moment, I finally recognized why there was no fire or swagger, no emotion and no heart that night. It’s as simple as the fact that the Trojan fans had it not in them either, which, in my mind, took a toll on the team’s effort to win the game. And, as understanding as that might be when trailing for nearly three full quarters by multiple touchdowns, that’s a disheartening fact to swallow.

In my years of contributing to WeAreSc, I have never before written in a manner such that USC Athletics is painted in a challenging light, and very far from that is my intention with this piece. But today, as I sit typing away all decked out in USC apparel, I offer this message to the Trojan Faithful: our warriors need your support on Saturday for the Notre Dame game in order to finish the season on a high note. Let’s go out on Thanksgiving Saturday and truly define “Fight On!” Because isn’t that what Trojans do, fight? Isn’t that what comes next, getting back on the horse? The ugly truth of the matter is that Los Angeles sports fans have slipped into an unfortunate habit of supporting a team when things are going well, and I sincerely hope that Trojan fans have not fallen victim to this stigma.

Despite Saturday’s defeat – during which UCLA played like the top-10, playoff contender it rightfully is – I firmly believe that a fire and swagger, emotion and heart, will return to the Coliseum and reignite a fan base and community. Our Trojans play for us – students, alumni, fans alike – and I sincerely hope that on Saturday we can return the favor and cheer for them, because this team, through all of the adversity it has been so tested by, deserves exactly that.

Fight on, and Beat the Irish!