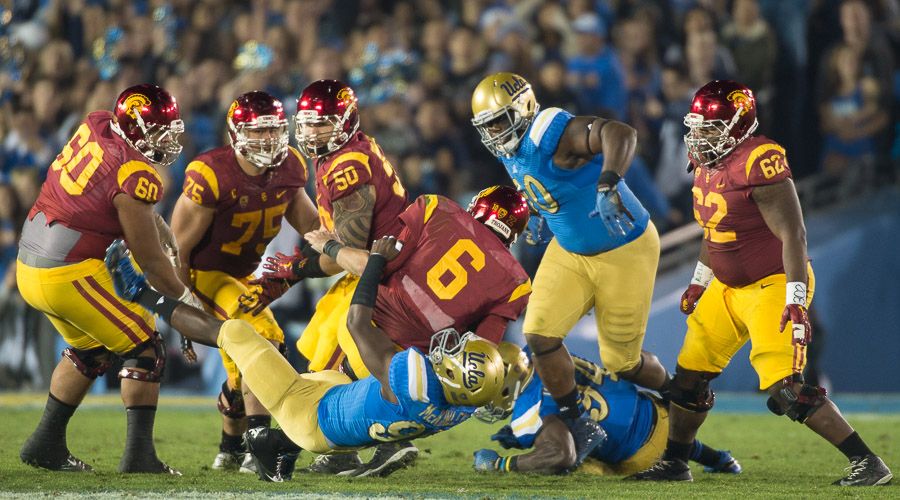 “How did this happen?”

What I saw was USC football played well…unfortunately UCLA played our brand of football and we played something that was disjointed, dispirited and disappointing. I hope most of us have by now already gone through the appropriate number of grief stages: shock, disbelief, denial, anger, reconciliation, forward progress, medication or whatever. At this stage of the season (game 11) getting all twisted after an incredible beat down by an arrogant but tough and talented UCLA team is just not in me. We lost 38-20 and it wasn’t even remotely that close. My approach for today is to try to understand, diagnose, report and opine a bit. Let’s do it…

Some of Sark’s thoughts post-game are revealing,” I am proud of our guys — their effort and their willingness to compete late in the game and battle. They were really good in the locker room. They were a team, which I commended them for. I was proud of them. They came together as a team, which is a hard thing to do through disappointment, through adversity, but again I’ve been praising these guys for that all along. It’s going to be a unique challenge for us. We have to get back on the horse and when there’s this level of disappointment, it’s going to take great leadership.” Trust me his players aren’t proud of their performances when almost nobody had a good game. I’m glad the locker room vibe was good or whatever he claims but frankly that sounds like happy crap to me. His team got dominated in every meaningful statistical category (more later) plus out hit, out manned, out coached, out nastied, out tackled, out prepared…out everything.

I understand that Sark has to keep this team together for another tough opponent in Notre Dame (less talented just as tough). But really does he have a plan to fix this mess? From my perspective I don’t think so…his scheme is a hammer in search of a nail and the defense and offense schemes don’t fit our skills and readiness. Using a DL pressure approach then admit that we don’t have the DL to pressure is amazingly revealing as Sark said,” [We need to] develop our defensive line guys the way UCLA has.” Huh, what a statement yet honest admission that even with one of best DT’s in the NCAA our DL can’t pressure routinely and Sark needs to develop that capability like UCLA has…when I last checked its game 11 and season is about over and this is a new thought?? I’ll give Wilcox some credit for bringing a better pressure package to this game but still we netted only 2 sacks and 6 TFL’s similar to our season averages but against our toughest opponent by far.

We used some different pressure packages while utilizing our 4-3 Hybrid base shell with Cover 2 and man-up on the corners. Secondary coverages were combinations of zone up on the wide side/strong side and man (up mostly but some “back” too) and two safeties (halves). We used at least 3 corner blitzes and about the same number of safety blitzes. Since we weren’t too familiar with blitz coverages McQuay got burned twice on blitzes and two other breakdowns when he missed his assignment by looking away from his hot receiver (57 yard touchdown pass). Btw way that TD pass was eerily similar to the 29 yarder Cal threw against us but from the opposite side of the LOS.

Tackling was generally poor on the perimeter and slightly better in the interior. I feared before the game that the A gap would be a vulnerability. I was wrong as it was our perimeter play that suffered and UCLA stuck it to us even with Sarao’s fabulous pick six. By the way that was a read blitz by Seymour as his man cover receiver took him to Hundley and he just left the receiver and went after Hundley leading to that poor throw and Sarao’s great pick. Later on Sarao read the perimeter bubble screen and split the double team and almost had a second pick…pretty heads up.

As for the secondary let’s just say that there is AJ then everybody else. Seymour had a pretty good game but got caught looking inside on two occasions and Shaw was a non-factor really. McQuay had an infamous day that really will be tough to live down…I hope he can for his sake and the team’s.

Interestingly our 3rd/4th down efficiency was about the same as UCLA’s “holding” them to 9 of 16 versus our offense producing 8 of 17. Red Zone was a mind blowing 5 of 6 for UCLA which would’ve been 6 of 6 absent a mishandled snap by Hundley. One other item that really bugged me was UCLA had 7 kickoffs with 4 touchbacks (should’ve been 5 as AJ ran one out he shouldn’t have). We had three kickoffs (excluding onside attempt) with no touchbacks. We need some work finding somebody who can kick the ball.

After the game Sark said,” By the time I even came out to meet the team, they were already huddled up as tight as we’ve been all year,” he said. “That’s where it begins. Through adversity is when we need to be even closer. As I told the team, we’re not dead. We lost a football game. We’re not dead. We’ll bounce back.” Nice positive viewpoint…sort of like The Little Big Horn was a setback for Custer.

To be clear our tradition and legacy in football was built upon real events, real people, real places and real successes. Saying something is so doesn’t make it so…Sark you have to prepare this team to win and what I see is a team in disarray.