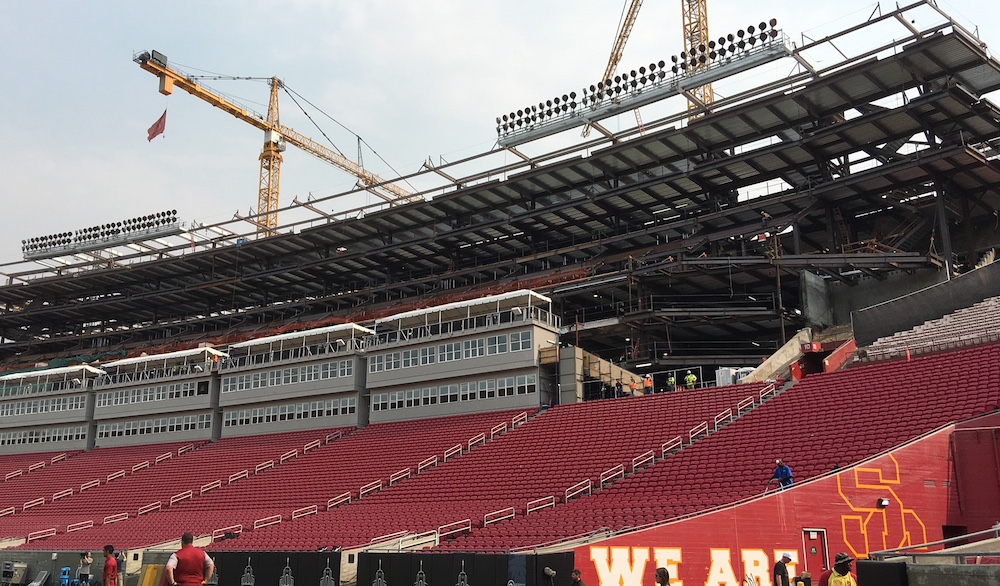 The Trojans held practice on Thursday in the Coliseum, it was a shorts, shoulder pads and helmets workout that featured a lot of work on the passing game as Clay Helton wanted his players to get adjusted to the stadium prior to the Saturday scrimmage.

“There was a lot of pitching and catching today because it’s just different being in the Coliseum, especially for some of our younger guys who can get a little wide-eyed at being here.”

Helton said the Trojans will treat Saturday like a live game and will look to play about a half of football.

In the initial WR vs DB period we saw Isaac Taylor-Stuart get a pick, Iman Marshall had a nice PBU, Amon-Ra St. Brown shook Isaiah Langley for a nice completion, Randal Grimes went up high to come down with a ball against coverage from Langley, JT Daniels hit Stephen Carr down the middle, and Trevon Sidney came across the middle and took a shot from Ajene Harris to force an incompletion.

As the 11-on-11 team period got started we noted that the two inside linebackers were Jordan Iosefa and Kana’I Mauga, both of whom are normally lined up at outside linebacker but with injuries to Cameron Smith and John Houston we saw some mixing and matching. The d-line at the time featured Malik Dorton, Liam Jimmons, Brandon Pili, Jay Tufele and Christian Rector.

Jack Sears got things going by swinging a pass to Ced Ware, who eluded Hunter Echols and went for a short gain. Amon-Ra tried to get behind Marshall with Bubba Bolden over the top but the pass was incomplete. Daniels hit Josh Imatorbhebhe for a 12 yard completion. Langley batted away a Daniels attempt for Tyler Vaughns. Sears dropped a pretty pass to St. Brown for a long touchdown against coverage from Olaijah Griffin. Pili had a sack on Sears. Falaniko batted down a Daniels pass at the line. Daniels tried to go deep to Amon-Ra who had the ball briefly as he crossed the goal line but the ground caused the incompletion. Raymond Scott had a sack.

Injury update: Jake Lichtenstein left with a calf issue. Levi Jones had an ankle issue, Palaie Gaoteote will have an MRI on his right knee, John Houston banged a knee with Ced Ware and was held out, and Michael Pittman had an AC sprain.

Schirmer takes part in practice: It was the first practice session for new offensive lneman Bernard Schirmer, who wore #51 and lined up at left tackle during warm-up drills.

Daniels wears glove on left hand: JT Daniels had a nail that was bent back on his left hand so he wore a glove on the hand to protect it.

Helton on Amon-Ra: He reminds me of Woody (Robert Woods) who stepped on the scene ready to go. One of the things we’re going to do with him is line him up at various spots so that a defense can’t focus on where he will be. We did it similar with Woody, Nelson Agholor, JuJu Smith-Schuster, Deontay Burnett.

Helton on Coliseum grass: I could sleep on this grass, it’s that nice. Man it’s fast.