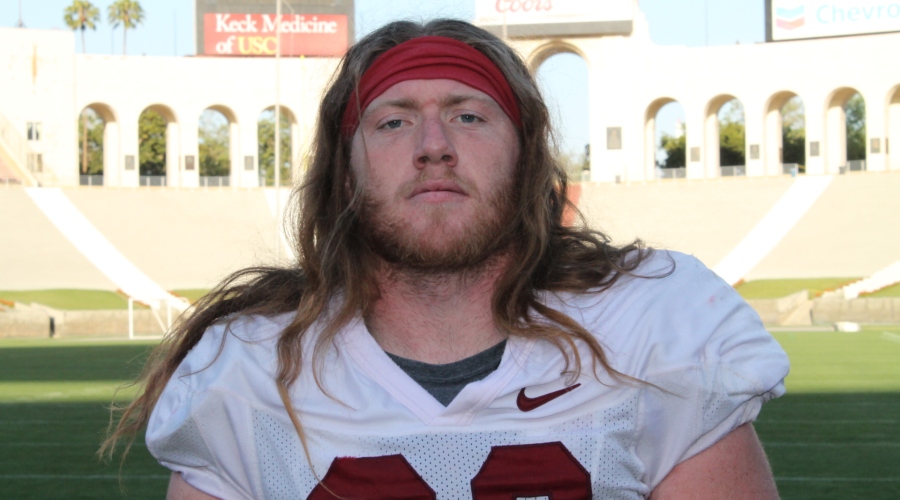 * During a team dance-off on Tuesday, early enrollee freshman Roy Hemsley had a chance to show off the “dancers feet” that helped make him such an attractive recruit at 6-6, 300. Roy has been raw on the field this spring but all the tools are there (it says something about how the coaches feel about him that he’s been placed at the left tackle spot).

* Speaking of early enrollees, Cameron Smith is really having a nice spring. On Tuesday he had a pick six against Max Browne and also stopped Soma Vainuku at the goal line in a short-yardage drill. I also like the fact that Sark is making a big deal about reviving the #35 linebacker tradition, Smith is wearing it well so far.

* Browne threw a beautiful touch pass on Saturday from his own 20, it went about 40 yards in the air and dropped down into the hands of Isaac Whitney, who had a step on the defender and raced untouched into the end zone. As has been noted many times, Browne throws the deep ball as well as any USC quarterback in recent memory.

* Olajuwon Tucker has been running with the first unit at will linebacker lately, and looking good, but he also got some reps on Thursday at rush end after both Scott Felix and Don Hill had been sent to the sidelines for some overly-aggressive play. Count Tucker as one of the rising stars from this spring, without a doubt.

* Kevon Seymour is quietly putting together a very good spring as a veteran senior. With so much attention being paid to Adoree’ Jackson, and rightfully so, it’s easy to forget that there is a pretty good player on the other side of him. Kevon had a pair of nice pass break-ups in the Thursday practice.

* When Sarkisian was at USC as an assistant coach there was a lot of success with wide receiver duos who complemented each other such as Mike Williams/Keary Colbert and Dwayne Jarrett/Steve Smith, and we could be seeing the beginning of a similar duo with JuJu Smith and Steven Mitchell.

* I’m hearing a lot of the players talk about the positive impact of the winter strength and conditioning workouts, which had them more physically prepared this spring for the up-tempo aspect of practices.

* He may not be Leonard Williams, but Delvon Simmons is not a bad option to be putting out there in Leonard’s old spot. Simmons has been active this spring and had one play in the Oklahoma drill on Saturday where he fought off a Max Tuerk block to make the tackle. Delvon is a big-bodied senior who has played a lot of football in his career.

* On the topic of the d-line, kudos to Cody Temple for the effort he’s given this spring. With no Atwaun Woods or Kenny Bigelow available, Temple has played through nagging bumps and bruises to battle Tuerk every day as the first unit nose tackle. Not only has he been that solid presence on the field (which has been recognized and appreciated by the coaches) but he’s also shown that he can hold his own and that should lead to some increased playing time.

* Nico Falah continued to go with the first unit at left tackle this week. Granted, part of this move is because Toa Lobendahn is needed as the reserve center but the coaches wouldn’t be staying with it if they didn’t like what they see from Nico so far. It’s definitely been a case of “out-of-sight, out-of-mind” for the most part in his time at USC because of injuries but now that he’s healthy he is making most of this extended spring look. I like how agile he is at the position.