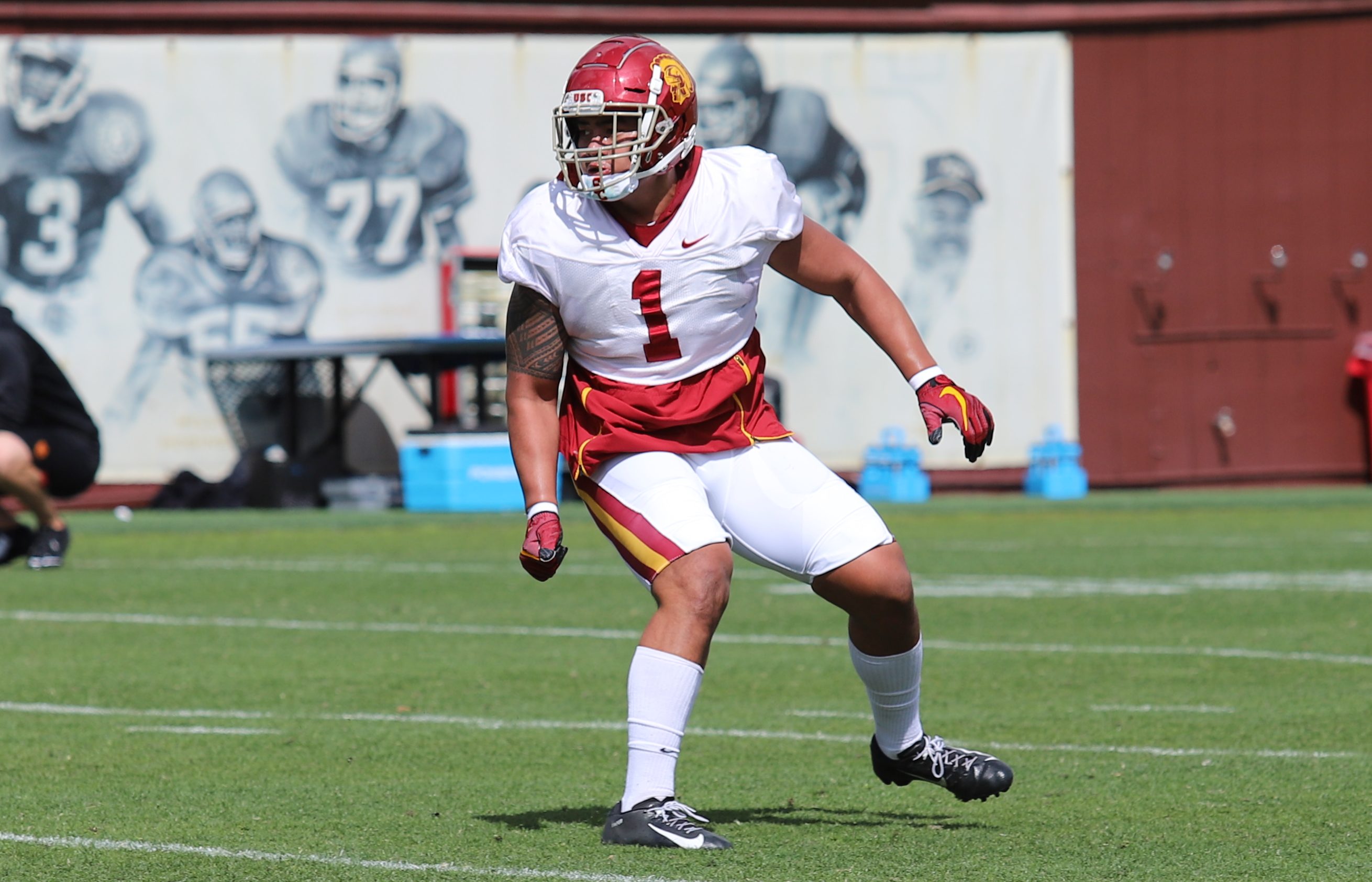 The Obvious: It won’t be a real game and if history is any kind of barometer, it doesn’t figure to resemble a John McKay, John Robinson, or Pete Carroll spring game either, but the USC Trojans are calling Saturday’s practice the USC Spring Showcase, which will “showcase” in Loker Stadium (11 a.m. PDT) some of the names that fans have been hearing about the past several weeks, although spring practice doesn’t officially end until next Saturday, April 13.

The Not So Obvious: With season ticket renewals reported down, last season’s 5-7 record with no bowl game momentum, continued university controversy, athletic director and head football coach scrutiny, no Coliseum cardinal and gold atmosphere, it’s anybody’s guess just how many fans will show on Saturday. However, expected to show are Traveler, the Trojans Marching Band, the USC Song Girls (yes, they are allowed to participate), the expected post-scrimmage autograph tables, and Bookstore items. If nothing else, the spirit of Troy should be present, and those hardcore fans that want to watch Clay Helton’s lads go through their paces in person will be sitting up in the metal bleachers ready to evaluate. A word of advice, bring a soft cushion and don’t forget the suntan lotion.

The Obvious: Saturday’s USC Spring Showcase practice will be televised by the Pac-12 Networks at 11 a.m. PDT.

The Not So Obvious: The lead announcer for the spring showcase on the Pac-12 Network will be former USC grad and veteran voice Jim Watson along with former Trojans’ assistant coach Yogi Roth, who will provide the commentary. The Spring Showcase will also be replayed on Saturday night (9 p.m./midnight PDT) and Sunday night (9:30 p.m. PDT).

The Obvious: In checking with the Pac-12 Networks spring game schedule, the Trojans are the first of the televised spring games.

The Not So Obvious: If you check the televised future schedule of spring games, the Pac-12 Networks will televise three spring games (Utah, Stanford, Arizona) the following Saturday, April 13, which means there would have been four springs in one window if the Trojans had their “true” final spring practice on that day. So now the Trojans have a spring window all to themselves.

The Obvious: One of the benefits of having a “low-key” Spring Showcase practice is that 2019 opponents won’t get an insightful scouting report on first-year offensive coordinator Graham Harrell’s version of the Air Raid offense, courtesy of the Pac-12 Network.

The Not So Obvious: You can bet that even with the restrained approach, the Trojans’ 2019 opponents will have their recording machines going for no other reason than to glean something from Clay Helton’s new offense. Certainly, Fresno State, the Trojans’ first opponent of the coming season will be looking in as will the Bulldogs’ rabid fan base, which will probably bring 20,000 for the season opener on Saturday, Aug. 31.

The Obvious: While much of the attention will be on the Trojans’ new offense, there will also be some intrigue regarding DC Clancy Pendergast’s spring emphasis on defending the run and rushing the passer.

The Not So Obvious: What does Clancy want to see on Saturday from his defense? The veteran defensive coordinator said, “I want to see building on technique on all three levels. That’s really going to be important, and we’re going to grade hard on that. I want to see overall communication. I think the communication has been good, and we’ll continue to work on that. We’ll see how the guys operate with all the coaches off the field and just go out there and play.”

The Obvious: The weather report for Saturday’s USC Spring Showcase practice on campus is forecasted to be partly cloudy with a high of 68 degrees.

The Not So Obvious: The real weather report is whether the Trojans come ready to hit, and whether Clay Helton will be willing to let his guys have at it for long stretches of time. Perhaps we’ll find out the pecking order of quarterbacks or will the QB rotation give each thrower a chance to show his skills in front of a national TV audience? As of this moment, the starting QB is anybody’s guess, but it would shock no one if returning starter JT Daniels (#18), now a sophomore, gets first crack. The other candidates – sophomore Jack Sears (#10),junior Matt Fink (#19), and true freshman and early enrollee Kedon Slovis (#9) – could perform in any order.

The running backs competition should interest fans because all three competitors – junior Vavae Malepeai (#29), junior Stephen Carr (#7),and freshman Markese Stepp (#30) – having been having a war all spring. Whether this is the scrimmage that Carr really makes a statement for the starting spot is critical. Because both Helton and Harrell have said the running game is a major weapon in Harrell’s offensive Air Raid playbook, fans will get a chance to judge for themselves. The wide receivers and the use of the tight end should be intriguing, although the depth at both positions is an issue. However, in terms of raw talent, most teams in the Pac-12 would love to have the Trojans’ wide receiver unit led by senior Michael Pittman Jr. (#6), junior Tyler Vaughns (#21), sophomore Amon-Ra St. Brown (#8), and emerging sophomore talent Devon Williams (#2). In terms of tight ends, watch a rejuvenated junior Josh Falo (#83) make a statement if he is healthy enough to play. The new offensive system has him motivated. The unfortunate “annual” offensive line concerns are still there, but the Trojans have a simplified offense, which Helton claims has made this unit better. Whether that is true, we’ll find out and so will the nation, which will be watching. If you’re looking at the O-line, check out the center battle between two truly talented athletes in sophomore Brett Neilon (#62) and redshirt freshman Justin Dedich (#57). The general consensus is that Neilon is ahead of Dedich, but we’ll see whether Dedich uses this opportunity to show to narrow any perceived gap.

As for special teams, we’ll see whether the Trojans’ fan base gets excited about 27-year-old redshirt freshman and former professional Australian football star Ben Griffiths (#24), who has special teams coach John Baxter giddy in excitement. Griffiths really does make punting fun to watch and a potential nightmare for punt returners.

The Obvious: The Locker Track and Field Stadium and Cromwell Field is located across the street from the Trojans’ practice fields.

The Not So Obvious: In case you don’t recall last spring’s publicized reminders from the old O/NSO about attending a practice at Cromwell Field, there are limited number of metal seating inside the track stadium (3,000), although the seats are good for viewing but so good for comfortability. The O/NSO recommends you also bring some binoculars. If a large turnout of fans does arrive, parking could be a challenge.

The Not So Obvious: Would the Trojans take a chance during a break in the action in introducing the new USC president Folt, especially with Swannie making the intro?

The Obvious: After Saturday’s USC Spring Football Showcase, the Trojan football team will head over to the Uytengsu Aquatics Center andjoin with the USC Song Girls for their annual relay race at “Swim With Mike.”

The Not So Obvious: To get an understanding of Swim With Mike and the effect it has had on its more than 200 physically challenged scholarship recipients since 1981, the following link is a recent story about a current beneficiary. At the end of the story is a compelling video about the Swim With Mike program:https://news.usc.edu/155578/scholarships-students-disabilities-tyler-hoog-swim-with-mike/

The Obvious: And finally, if you’re still not sure you want to go to USC Spring Showcase, just remember many of you won’t see the Trojans until training camp opens in early August.

The Not So Obvious: In case you’re wondering, the O/NSO will be there Saturday in person because it’s still a USC football practice, and no matter how underplayed or underwhelming it might appear, it’s still USC Trojans football.